San Antonio had possession trailing 112-109, but Jazz forward Derrick Favors batted down a pass near the 3-point line and raced down the court for a monstrous one-handed dunk to essentially seal the Jazz’s second win over the Spurs this season.

LaMarcus Aldridge had 31 points for San Antonio in their final home game before embarking on their annual monthlong rodeo road trip.

The Spurs lost three times during the five-game homestand after losing just three home games prior.

The Jazz were without star rookie Donovan Mitchell, who missed the game due to an illness. The Jazz had no trouble replacing the production of their leading scorer against the Spurs, shooting 57 percent from the field.

Utah was 5 for 8 on 3-pointers in the first quarter, including two from Rubio over second-year player Dejounte Murray.

San Antonio struggled offensively in the first quarter as it did throughout the homestand.

The Spurs went on an 18-7 run spanning the end of the third quarter and first five minutes of the fourth to erase what had grown to a 14-point deficit. Patty Mills’ 3-pointer capped the run, cutting the Jazz’s lead to 94-93. The Jazz responded with O’Neale draining a pair of 3s and Joe Ingles adding another.

Jazz: Alec Burks made his first start of the season. He finished with eight points and eight rebounds in 25 minutes. . Rodney Hood played 16 minutes after being listed as probable with a bruised lower leg. . G Joe Johnson sat the game out to rest. . The Jazz beat the Spurs 100-89 in Salt Lake City on Dec. 21.

Spurs: Murray became the first player since Kawhi Leonard with 500 points and 300 rebounds in his first 100 games with the Spurs. . Brandon Paul did not play after being downgraded from questionable with back spasms. . Davis Bertans returned to the court after a brief scare in the first quarter. Bertans appeared to twist his ankle after stumbling out of bounds while trailing defensively. He asked San Antonio coach Gregg Popovich to call a timeout and went to the locker room with the team’s medical staff, but returned a few minutes later and immediately checked into the game. . The Spurs’ next home game is Feb. 28 against New Orleans.

Spurs: At Phoenix on Wednesday night. 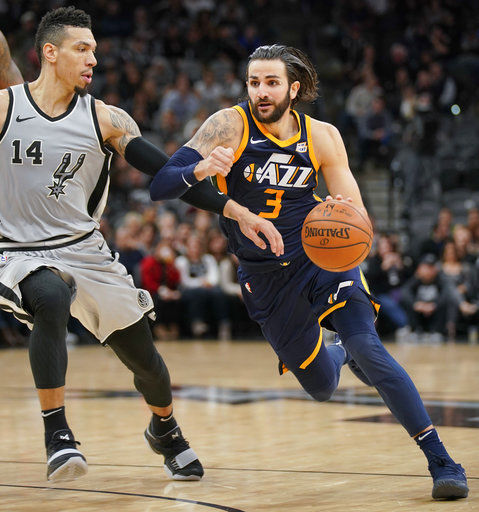 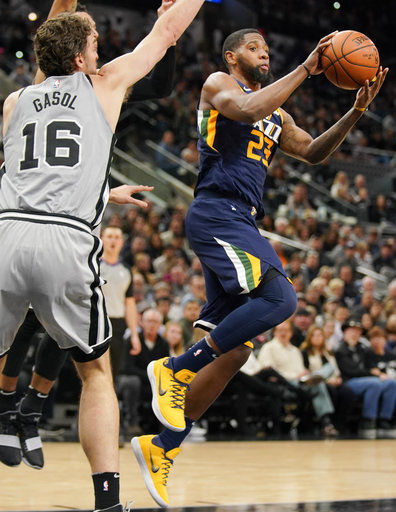 Utah Jazz's Royce O'Neale (23) looks to pass as he is guarded by San Antonio Spurs' Pau Gasol during the second half of an NBA basketball game Saturday, Feb. 3, 2018, in San Antonio. Utah won 120-111. (AP Photo/Darren Abate)