SALT LAKE CITY (AP) — Donovan Mitchell scored 25 points, including a go-ahead pull-up jumper with 39.2 seconds left, and the Utah Jazz extended their league-best winning streak to 10 games with a 101-99 win over the San Antonio Spurs on Monday night.

Mitchell hit a pair of go-ahead baskets and a free throw to give the Jazz the lead in the final minute after they trailed by as many as 13 points in the fourth quarter. Joe Ingles added 20 points, seven rebounds and five assists for Utah. Derrick Favors had 19 points and eight rebounds.

Kyle Anderson scored 16 points and Pau Gasol had 15 points and 15 rebounds for the Spurs, who lost to Utah for the third time this season.

San Antonio went ahead 83-70 on a pull-up jumper by Bryn Forbes with 9:29 remaining. The Jazz chipped away before Mitchell hit a 3-pointer to tie it at 87 with 4:53 left. The teams traded baskets from there until Mitchell sealed it in the final minute.

Utah used a 20-4 run in the second quarter to take its largest first-half lead at 54-42. San Antonio cut the lead in half before halftime on layups by Gasol and Anderson.

In the third quarter, the Spurs used an 11-1 run to go back in front. Davis Bertans buried a 3-pointer to put San Antonio up 66-61.

Spurs: F LaMarcus Aldridge (sore right knee) did not play. Aldridge leads San Antonio in scoring and rebounding. … The Spurs outscored the Jazz 54-40 in the paint. … Gasol recorded his 12th double-double of the season.

Jazz: G Ricky Rubio (left hip soreness) missed his second consecutive game. … Ingles scored 10 of Utah’s first 15 points. He set a career high in scoring in each of the previous two Jazz victories. … F Jae Crowder finished with 14 points in his first home game since Utah acquired him from Cleveland.

Spurs: Travel to Denver to face the Nuggets on Tuesday.

Jazz: Host the Suns on Wednesday. 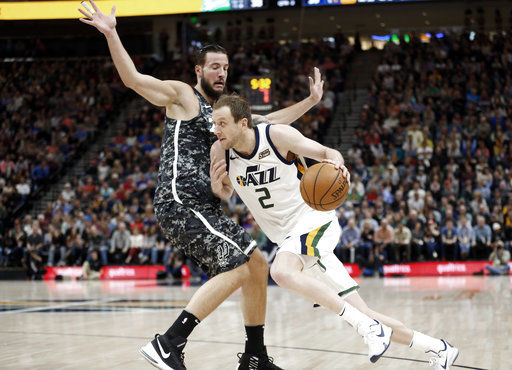 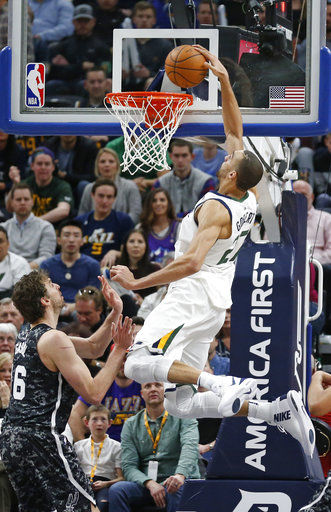