Rookie Donovan Mitchell of the Utah Jazz put on a show in the slam dunk contest to cap off NBA All-Star Saturday.

Mitchell edged Larry Nance Jr. by two points, sealing his victory with a close approximation of the 360-degree spin dunk that Vince Carter used to win the 2000 contest.

“I wanted this so badly,” Mitchell said. “This is one of my favorite events of All-Star weekend. To not only be in it, but to win it, it’s crazy.”

Before making his winning dunk, Mitchell peeled off his Jazz jersey and wore a vintage Carter jersey from the Toronto Raptors.

Mitchell — three inches shorter than the 6-foot-6 Carter — needed a score of 47 to beat Nance, and he got a 48 from the five judges: DJ Khaled, Mark Wahlberg, Chris Rock and Hall of Famers Julius Erving and Lisa Leslie.

Nance, who was trying to win the contest 34 years after his father won it, had earned a perfect 50 with a dunk off a double alley-oop off the glass.

Mitchell advanced to the finals with a creative dunk in the first round that used his sister, Jordan, as well as Kevin Hart and the comedian’s son as props. For that dunk, Mitchell wore a Darrell Griffith Jazz jersey. Griffith participated in the first slam dunk contest in 1984.

“I appreciate Kevin Hart coming out there and helping me out,” Mitchel said. “He’s my favorite comedian.”

Devin Booker of the Phoenix Suns won the 3-point contest with a record 28 points in the final round. He beat 2016 champion Klay Thompson of the Golden State Warriors and Tobias Harris of the Los Angeles Clippers.

“It feels really good,” Booker said. “I wanted to go out there and make a name for myself.”

Did he ever. He was sensational in the final round on Saturday, when he missed only five of 25 shots.

Each player shot five five-ball racks with a one-minute time limit. The final ball of each one was a “money ball” worth two points, and one of the racks, usually the last one, was all money balls. Booker made the money ball shot on his first four racks, and then made four of the five balls on the money ball rack.

Harris, Booker and Thompson advanced from the eight-man field to the finals. Harris scored 17 points before Booker scorched the nets for 28 points. Thompson followed and scored 25 points.

The previous record was 27 points, set by Stephen Curry in 2015 and matched by Thompson the following year.

Booker, the 21-year-old sharpshooter in his third season with Phoenix, is averaging 24.2 points per game this season as the NBA’s 12th-leading scorer. Eleven months after the shooting guard dropped 70 points against Boston to become the youngest player in NBA history to score even 60 in a game, Booker added another accolade to his promising career with the 3-Point title.

Thompson beat the buzzer with his final shot of the first round to reach the finals with 19 points. Booker also scored 19 and Harris had 18.

Spencer Dinwiddie of the Brooklyn Nets won the skills challenge to kick off NBA All-Star Saturday.

Dinwiddie, who played at Taft High in the Woodland Hills neighborhood of Los Angeles, beat Lauri Markkanen of the Chicago Bulls in the final round.

The skills competition consisted of two players going head to head. They dribbled around pylons, passed the ball into a net, dribbled to the other end of the floor for a layup and then dribbled back to the other end to take a pull-up 3-pointer.

Eight players started the competition, with Dinwiddie and Markkanen advancing to the final.

Markkanen struggled passing the ball into the net, giving Dinwiddie a big lead. Dinwiddie dribbled down the floor and missed his first 3, but drained the next one to win.

Silver said at his annual state of the NBA address that he didn’t know much about Saturday’s meeting but had seen a joint statement.

“I was pleased to see they focused on themes of respect and empathy,” he said. “It’s a great statement about the league that these stakeholders think it’s important enough and they have an obligation to the game that they should be sitting down and talking to each other.

“I said it before, this isn’t about ratcheting up fines. There are larger issues here.”

Silver said there is “nothing all that aberrational going on. To the extent there’s a perception there’s an issue, we want to use that as an opportunity, and sitting down can only improve things.”

Among the items listed in the joint between the players association and referees association were “enhanced education and clarification around the Respect for the Game rules” and plans for a “broad review” of existing rules and developing joint recommendations to enhance them. The sides said there will be future meetings and discussions.

Drummond, who made it as an injury replacement for Washington Wizards guard John Wall, didn’t hold back when he was asked at media day Saturday why he wasn’t picked earlier.

“I wouldn’t say it bothered me. It was more like I wasn’t even surprised because everyone knows how the NBA is. It’s all about politics and popularity votes,” Drummond said. “It is what it is, but for me I know I worked hard to get to be an All-Star. But that’s the way it works”.

Starters were determined by a mix of fan, player and media voting. The reserves are selected by the coaches, and NBA Commissioner Adam Silver chose injury replacements.

Drummond says it’s an honor to replace Wall and sent his best wishes following knee surgery, but added that the All-Star selection process favors “whoever’s hot at the time.”

LeBron James says he will not stick to sports.

The Cleveland Cavaliers All-Star reiterated his determination to speak out on social issues and the nation’s political climate Saturday during media availability for the NBA All-Star Game.

James says he “will definitely not shut up and dribble” because he realizes the weight that his words carry in the face of injustice.

James was backed by All-Stars Stephen Curry and Kevin Durant, who believe athletes have a unique opportunity to advocate for positive social change.

Nine days after being traded from the Los Angeles Lakers to the Cleveland Cavaliers, Larry Nance Jr. was looking forward to being back on his old home court for the NBA Slam Dunk Contest.

He’ll try to follow in the footsteps of his father, who won the NBA’s first slam dunk title in 1984.

“It would be awesome,” Nance said a few hours before Saturday night’s dunk contest. “I mean, obviously father-son being in it has never been done before. So there’s a couple firsts there. But obviously it would mean so much more if I got to hold the trophy above my head the same way my dad did 25 years ago or whatever it was.”

Nance was one of the four players who went from Los Angeles to Cleveland in a four-player trade at the deadline.

“I’m not, for lack of a better term, over it, but it’s still fresh in my mind, it’s something that is still kind of shocking,” Nance said. “But at the same time I can’t wait for all this to be done with so I can just get back to learning how to jell and mesh with my team.”

Just a few minutes after Paul George sat down at his podium for NBA All-Star Media Day, a robust chant of “We want Paul! We want Paul!” broke out among the fans sitting in bleachers in the back of the convention hall.

“It makes you feel great,” the Oklahoma City Thunder All-Star said. “I love it. It’s not to say that I don’t. I felt the energy. I know where the love is.”

George grew up in Palmdale, about 65 miles from Staples Center, where the All-Star Game will be played Sunday night.

“It feels good to be welcome. I think anybody would want to be wanted and be welcomed,” he said.

The fans, of course, want George to play with the Lakers. He said he’s happy with the Thunder, but with free agency looming, coming to Los Angeles is a big possibility.

Asked if he knows what he’s going to do this summer, he said: “I don’t.”

He added: “I know what I feel is best but it’s a long way until the end of the season.”

Maurice Cheeks and Chris Webber also made the cut, with the finalists announced Saturday morning as part of the NBA All-Star weekend.

Finalists must receive 18 votes from the 24-member honors committee to be enshrined.

The entire class will be unveiled during the NCAA Final Four in San Antonio.

The NBA’s best players have arrived in Hollywood for a star-studded All-Star weekend.

None of those stars currently play for the hometown Lakers or Clippers, and that dearth will be discussed when basketball’s best get together Saturday for practice.

LeBron James is likely to be asked plenty of media questions about his interest in joining the Lakers, who have cleared salary cap space for two superstars this summer.

Paul George, the Oklahoma City All-Star, is from nearby Palmdale, California. He has a well-known love for the Lakers.

The All-Star game also has a big new wrinkle this season: Captains Stephen Curry and James picked their own teams. That draft wasn’t televised, and some stars could have a few good-natured questions about the process. A few hours later Klay Thompson gets warmed up for the three-point competition and Utah rookie Donovan Mitchell sets his sights on the dunk contest. 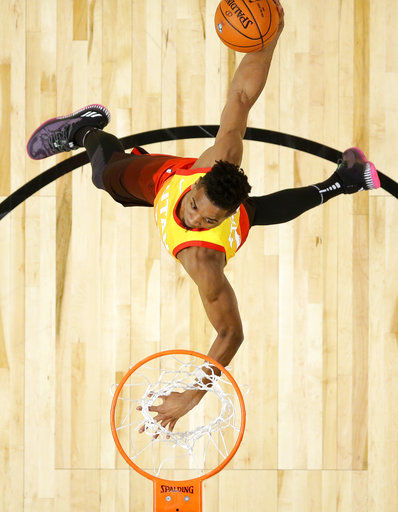 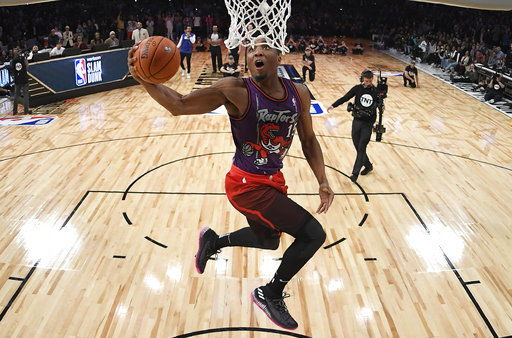 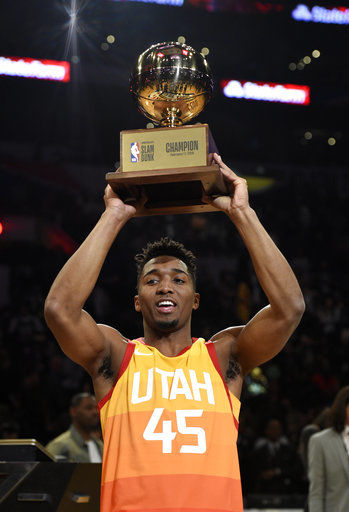