Minnesota Timberwolves' Karl-Anthony Towns, middle, is held back by Jamal Crawford (11) after he was called for his second technical foul, and was ejected during the first half of the team's NBA basketball game against the Utah Jazz on Friday, March 2, 2018, in Salt Lake City. (AP Photo/Kim Raff)

SALT LAKE CITY (AP) — In a game peppered with heated emotions and hard fouls, Rudy Gobert turned in one his finest performances of the season.

Gobert scored a season-high 26 points, grabbed 16 rebounds and blocked four shots to help the Utah Jazz beat the Minnesota Timberwolves 116-108 on Friday night in a game that featured three ejections.

His dominance around the basket spread throughout the team. Utah finished with a 46-27 advantage on the glass. The Jazz also outscored the Timberwolves 19-0 in second-chance points and held them to a season-low two offensive rebounds.

Gobert, who returned from injury in mid-January, is averaging 14.6 points, 10.7 rebounds and 2.4 blocks over his last 18 games. He was aggressive Friday from the opening tip.

“The mindset he had was the reason that he had so much success on both ends of the floor,” Jazz coach Quin Snyder said. “I thought his offensive rebounding was as good as it’s been this season, particularly after getting in foul trouble early. He was able to come back and really stabilize us defensively and play without fouling and still have an impact.”

Donovan Mitchell also scored 26 points for the Jazz. Jae Crowder — who was thrown out not long after jawing with Timberwolves coach Tom Thibodeau — and Derrick Favors added 15 points apiece.

Utah (32-30) beat Minnesota for the first time this season.

Andrew Wiggins scored 27 points and Jeff Teague added 25 before getting ejected for a flagrant foul on Ricky Rubio in the Timberwolves’ second straight loss.

Karl-Anthony Towns finished with just 13 points after picking up two technical fouls and getting ejected before halftime. Without him in the middle, the Timberwolves had no answer for Gobert.

“The rebounding, I thought, was a problem the whole game,” Thibodeau said. “It was a big concern going into the game. But I thought our guys kept fighting. Obviously when you lose (Towns), you’re losing your best rebounder. But they kept battling. I thought we had a shot down the stretch and then we had some tough breaks.”

Utah closed the first half on a 20-6 run stretching over the final 3:49. Gobert and Joe Ingles combined to score off dunks on three straight possessions to fuel the run and Mitchell buried a step-back jumper to finish it off and give the Jazz a 56-45 halftime lead. Towns was ejected with 23 seconds left in the second quarter after picking up his second technical foul for complaining to the officials.

The Timberwolves did make a run behind some strong third-quarter play from Teague. He took a steal in for a dunk and buried a jumper on back-to-back possessions as Minnesota closed to 70-66.

“We’re treating every game like it is the same,” Mitchell said. “But going 0-2 against these guys, you don’t want to go 0-3. That was our mentality.”

Teague was ejected when he chased down a dribbling Rubio and knocked to him the ground with his shoulder. Injured Wolves All-Star Jimmy Butler tweeted that <a href=”https://twitter.com/JimmyButler/status/969811925742780417″ target=”&mdash;blank”>Teague’s play was what he liked to see</a> .

Timberwolves: Taj Gibson played 39 minutes after leaving in the third quarter of Thursday’s 108-99 loss to Portland with a left hip contusion. He finished with 12 points on 6-of-8 shooting. … Minnesota went 9 of 17 (.529) from 3-point range.

Jazz: Gobert racked up his 18th double-double of the season before halftime. He totaled 18 points and 10 rebounds, along with two blocks, in the first half. .. Crowder has scored in double figures in all seven games he’s played with Utah so far. He’s averaging 13.3 points off the bench.

Minnesota’s struggles away from home continued. Since the start of January, the Timberwolves are just 2-13 in road games. They won 11 of their first 19 road contests this season. 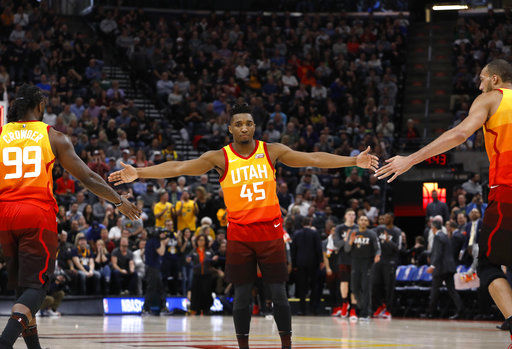 Utah Jazz's Donovan Mitchell (45) celebrates with Jae Crowder (99) and Rudy Gobert (27) after the first half of the team's NBA basketball game against the Minnesota Timberwolves on Friday, March 2, 2018, in Salt Lake City. (AP Photo/Kim Raff) 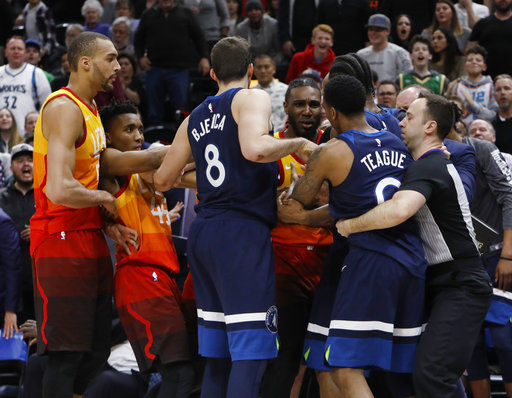 Minnesota Timberwolves' Jeff Teague (0) and Utah Jazz's Jae Crowder, back, tussle after Teague was called for a foul for pushing Utah Jazz's Ricky Rubio to the court during the second half of an NBA basketball game Friday, March 2, 2018, in Salt Lake City. Teague was called for a flagrant foul and ejected following the fight on the court. The Jazz won 116-108. (AP Photo/Kim Raff) 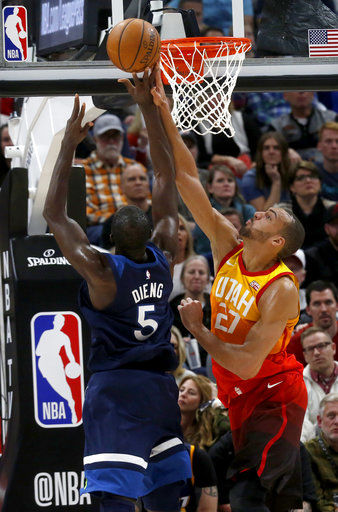 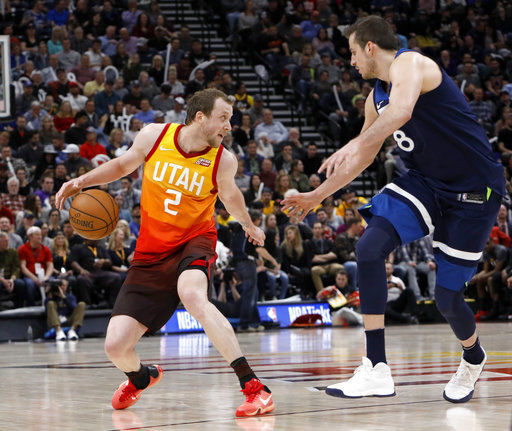 Utah Jazz's Joe Ingles (2) tries to dribble past Minnesota Timberwolves' Nemanja Bjelica (8), in the second half of an NBA basketball game on Friday, March 2, 2018, in Salt Lake City. The Jazz went on to win 116-108. (AP Photo/Kim Raff)