SACRAMENTO, Calif. (AP) — Donovan Mitchell scored eight of his 27 points in the fourth quarter and the Utah Jazz beat the Sacramento Kings 98-91 on Saturday night.

Rudy Gobert had another double-double with 16 points and 12 rebounds for the Jazz. Ricky Rubio added 10 points, eight rebounds and six assists, and Derrick Favors scored 15 to lead Utah to its fifth consecutive win in Sacramento.

The Jazz, who beat Minnesota on Friday, have back-to-back victories for the first time since their 11-game winning streak was snapped by Portland on Feb. 23.

Sacramento trailed by 18 in the third quarter but pulled to 95-89 following De’Aaron Fox’s three-point play with 49.9 seconds left.

Rubio made one free throw and Mitchell sank two to help Utah hold on.

The Kings have lost four of five since the All-Star break.

The Jazz closed the first quarter on a 13-4 run capped by Jae Crowder’s 3-pointer with 2.2 seconds left, then pulled away in the second.

Gobert dribbled through a pair of Sacramento defenders for a dunk, and Joe Ingles followed with a 3-pointer to put Utah up 45-27.

Fox scored eight points in the second quarter to help the Kings pull to 50-43 but picked up his third foul with 11.3 seconds left in the half.

Sacramento cut the gap to 75-66 going into the fourth following Frank Mason’s 3-pointer.

Jazz: Utah hasn’t lost in Sacramento since Dec. 8, 2015. . Mitchell has scored 23 or more in seven of his last nine games. . Utah limited Sacramento to 29.2 percent shooting (7 of 24) in the first quarter. . Crowder made two 3s in the opening 12 minutes and added his third 40 seconds into the second quarter. . The Jazz improved to 21-5 when holding opponents under 100 points.

Kings: Zach Randolph returned to the lineup after being left on the bench for two games. . Kosta Koufos had eight points and seven rebounds in his first start since Jan. 28. Koufos started because Willie Cauley-Stein was held out with a lower back strain. . Sacramento had only four second-chance points through three quarters. 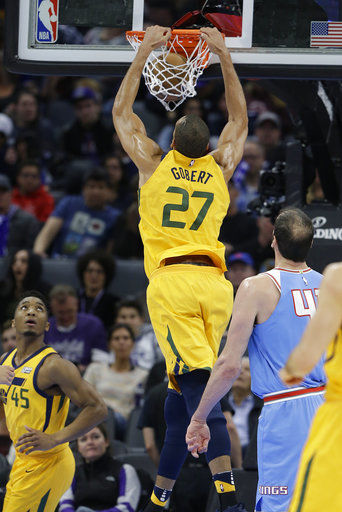 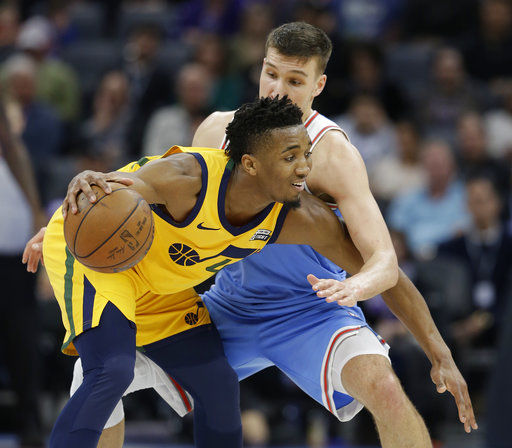 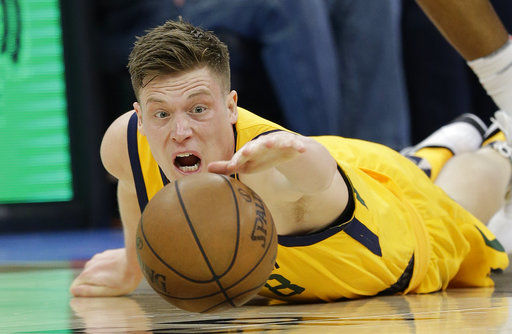 Utah Jazz forward Jonas Jerebko goes to the floor for the ball during the second half of the team's NBA basketball game against the Sacramento Kings on Saturday, March 3, 2018, in Sacramento, Calif. The Jazz won 98-91. (AP Photo/Rich Pedroncelli)