SALT LAKE CITY (AP) — Rudy Gobert had 21 points and 17 rebounds to lead the Utah Jazz over the Orlando Magic 94-80 on Monday night.

Gobert made 9 of 10 attempts, mixing in a jumper with mostly dunks and one-handers around the rim.

Donovan Mitchell scored 19 points and Joe Ingles added 18 points, eight assists and seven rebounds for the Jazz, who have won three in a row and 15 of 17. Still, the Jazz sit 1 1/2 games outside the eighth playoff spot in the Western Conference.

Nikola Vucevik had 15 points — most coming from the perimeter outside Gobert’s reach, including three 3s — and 12 rebounds while Aaron Gordon had 13 points for the Magic, who had their modest two-game winning streak stopped.

Utah’s Derrick Favors was a late scratch because of neck spasms in pregame warmups, so Jonas Jerebko stepped in and scored 12 points. Ricky Rubio also had 12 points.

Knowing Gobert was patrolling the paint behind them, the Jazz were able to drive shooters off their preferred spots and close out on 3-point attempts.

After Orlando averaged 111 points in wins over the Pistons and Grizzlies, the Magic shot just 34 percent.

Powered by Ingles’ hot long-range shooting, the Jazz went on a 12-0 run toward the end of the second quarter and led 54-44 at the half.

Magic: The Jazz raced to a 9-0 lead to open the game but the Magic bounced back with 10 straight points. … Gordon and Fournier both shot 4 for 18. … Orlando’s bench outscored the Jazz reserves, 26-12.

Jazz: Utah posted an 11-15 record when Gobert was out with injuries this season, but have a 15-4 record since the big Frenchman returned. … Not known to say much to the officials, Utah coach Quin Snyder had to be held back by his assistants, got two technicals and was tossed with 52.9 seconds left in the game. … Ingles had 16 points in the first half. … The Jazz outrebounded the Magic 48-36.

As they did against Minnesota and Sacramento, the Jazz frittered away a big second-half lead and had to quell a rally to win. Utah led by 16 points in the third quarter only to have the Magic battle back within 80-73 midway through the fourth quarter. But Mitchell, as has become his habit, took over in the clutch time and scored seven points down the stretch. 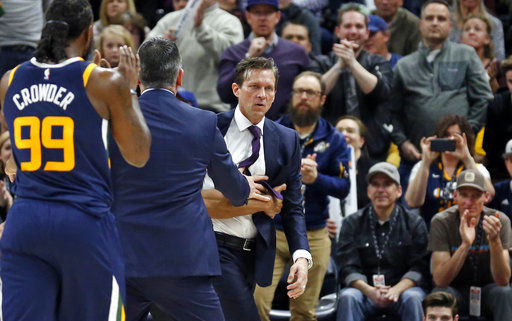 Utah Jazz head coach Quin Snyder is held as he walks off the court after being ejected from the game in the second half during an NBA basketball game against the Orlando Magic Monday, March 5, 2018, in Salt Lake City. (AP Photo/Rick Bowmer)

Utah Jazz center Rudy Gobert (27) and guard Donovan Mitchell (45) talk as they walk to the bench in the second half during an NBA basketball game against the Orlando Magic, Monday, March 5, 2018, in Salt Lake City. (AP Photo/Rick Bowmer) 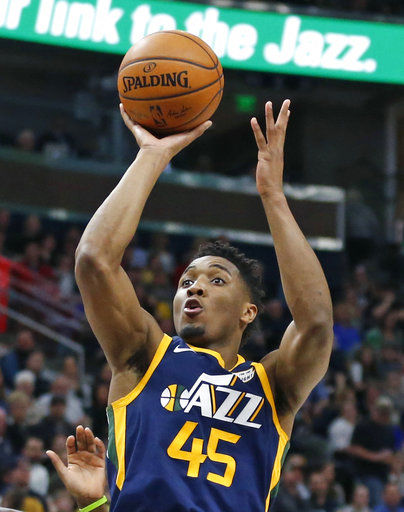