INDIANAPOLIS (AP) — The Utah Jazz are doing everything they can to crash the crowded Western Conference playoff picture.

Rudy Gobert had 23 points and 14 rebounds, Donovan Mitchell finished with 20 points and six assists, and Utah crept closer to a possible playoff berth with a 104-84 victory over the Indiana Pacers on Wednesday night.

The Jazz were 17-26 after losing to the Pacers on Jan. 15, but they’ve gone 18-4 since to reach 35-30. They were a half-game behind Denver for the eighth seed before the Nuggets hosted Cleveland later Wednesday.

“We just play for one another,” Gobert said. “Everyone is on the same page. Everyone wants to win, and you can feel that. There’s a focus in the locker room. It’s great.”

And it’s evident — especially on the road. After starting the season 5-19 in contests away from Salt Lake City, the Jazz have won nine straight road games.

After falling behind early, Utah outscored Indiana 28-12 over the final eight minutes of the first quarter and led 54-44 at halftime. Indiana pulled within single digits a couple of times in the third, but Utah was too much on a night when the Pacers shot 38.6 percent from the floor.

Indiana had two small runs where they used a fast-paced offense to push the ball up the floor, but the Jazz were prepared and countered with tremendous transition defense.

“We followed the game plan and tried to get back on defense because they are a good team in transition,” Rubio said. “We wanted to play 5-on-5 as much as possible. We are learning how to be good as a team. When things go wrong, we talk and figure things out, especially on the road.”

Utah’s offense was sound. The Jazz shot 51 percent from the floor and had 30 assists on 51 baskets, while Indiana had just 12 assists.

The lone bright spot for Indiana on offense was Myles Turner, who finished with 24 points. Bojan Bogdanovic and Victor Oladipo each scored 13 points, and Cory Joseph had 12 points and six rebounds.

“(Utah is) a good defensive team, and we didn’t get anything,” Pacers coach Nate McMillan said. “I don’t think we got clear looks. They established their tempo and the game (was played) at their tempo. We could not get any stops on defense all night long.”

Standout rookie Mitchell was met by a large crowd of University of Louisville fans near the tunnel as he walked off the floor.

At 37-28, Indiana is far ahead of where many expected the team to be in March. While the Pacers are almost locked into the Eastern Conference playoff picture, their seeding is less certain. The Pacers are on Cleveland’s heels for the third playoff spot, but after a matchup with Atlanta on Friday night, Indiana’s next four games will be against current Eastern Conference playoff teams, with two of those contests on the road.

Indiana: Bogdanovic has scored in double figures in 14 straight games. It is the longest such streak of his career. … Indiana is 11-11 against the Western Conference.

Utah: Joe Ingles recorded the first double-double of his NBA career with 11 points and 10 rebounds. … This was Utah’s 21st win of the season against teams above .500. The Jazz have now won two of the last three games at Indiana. 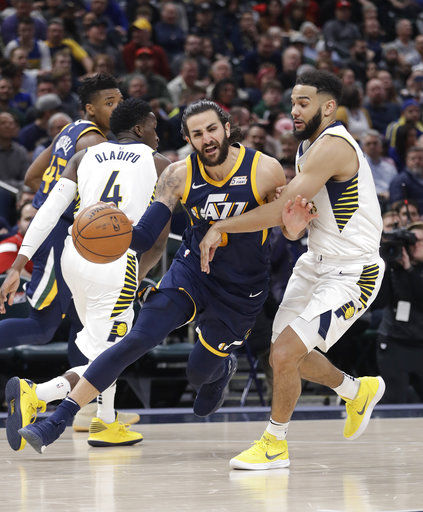 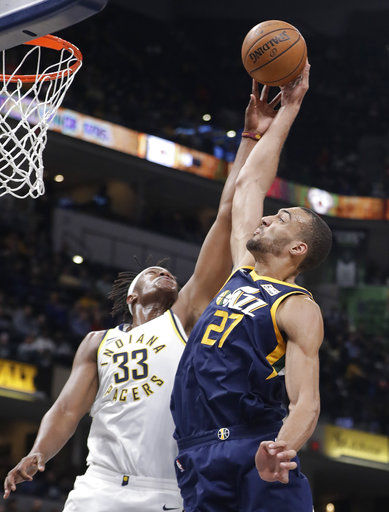