The German Christmas tradition of making gingerbread houses dates back to at least the 1600’s, but for Logan’s Downtown Alliance, it’s only in its 19th year. The Alliance is spicing up Christmas for downtown shoppers with gingerbread houses and dioramas in windows of downtown establishments.

Gary Saxton, Director of the Logan Downtown Alliance, said they have 14 gingerbread displays in downtown businesses in this year’s competition. People can vote for their favorites by using ballots at the different locations. Ballots will be collected on Dec. 26 to decide the winner.

“It’s been really nice, we’ve had a lot of beautiful creations,” Saxton said. “We will have six winners: three professional and three community gingerbread house builders.”

He said all of the top spots will get $100 cash prize and will be based on public votes.

Lindsay Baxter, who works at Stork Landing, said the gingerbread house (“The First Christmas in Cache Valley” by Kathy Christensen) in the store has been popular.

“We’ve have had a lot of people come by and look at it,” she said.

John Funk, of the Cache Valley Antique Mall, said it was a positive experience for the store he works in. The gingerbread house in his establishment was called, “The Three Wise Women,” by Sue Rakes.

“We’ve had quite few people come in because of the gingerbread house,” he said. “It’s been a lot of fun.”

Rakes said she thought it would be fun to have a different slant on the Three Wise Men.

“The day after turning in my entry, I ended up having a heart attack and an unexpected surgery,” she said from her hospital bed at the Intermountain Medical Center in Murray. “I hope people enjoy it.”

Above her creation she had printed sign that said, the Three Wise Women, “would have asked directions, arrived on time, helped deliver the baby, brought practical gifts, cleaned the stable, made a casserole, baked bread, and there would be PEACE ON EARTH.”

Another gingerbread home builder, Nicholas Hendricks, the only man who entered the contest, called his creation, “2nd Dam Christmas.”

“I was trying to figure out how to do a covered bridge like the Madison County Bridge,” he said. “When they announced the theme I connected the two; the dam and bridge.”

He said he was inspired by his grandmother who would always make gingerbread houses at Christmas time.

“She was an amazing housemaker,” he said. “I asked her to build a castle once. She was good at making houses, but she wasn’t much of a castle maker.”

His parents continued the tradition and so has he.

Besides the gingerbread houses, make sure to check out the huge candy ornaments at the Bluebird Candy Company, 75 West Center Street, and the nativity and Christmas tree at the Logan Tabernacle, 50 North Main Street.

Voting ballots will also be available at each site until December 25. 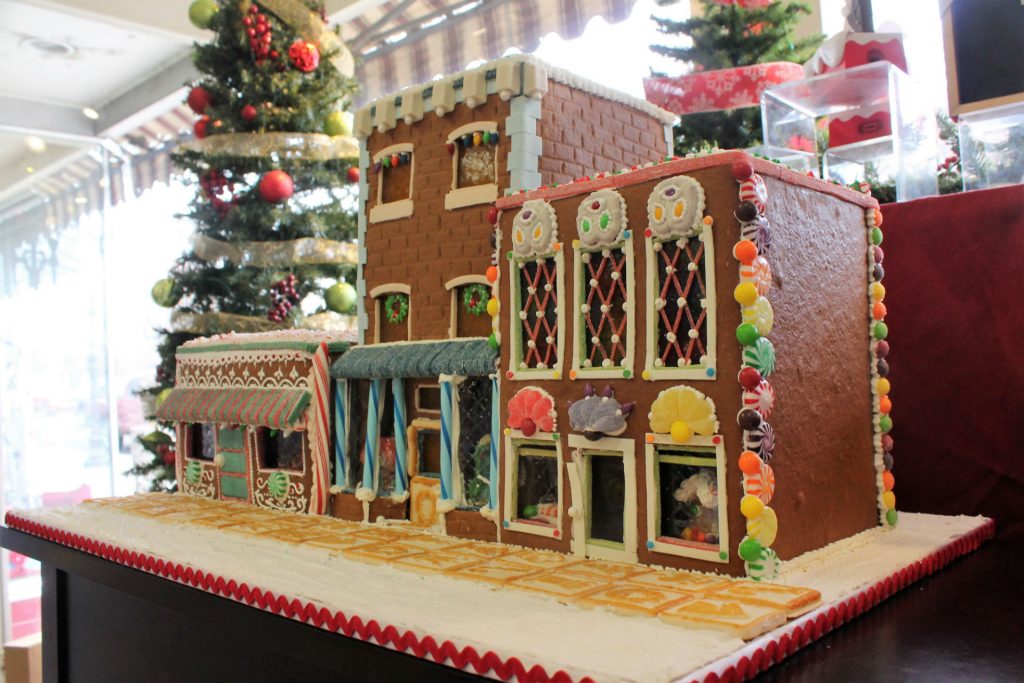 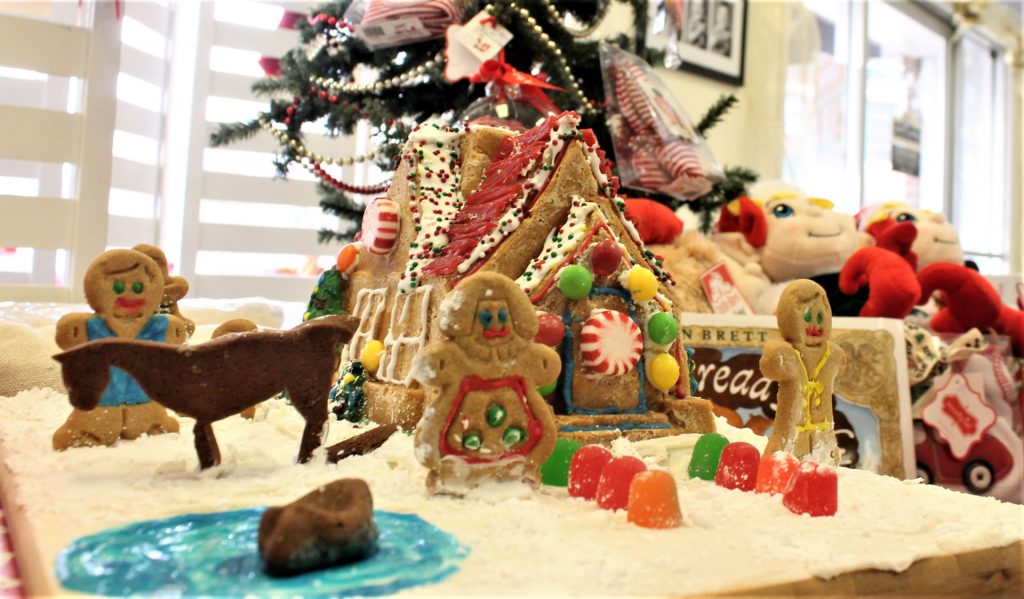 Kathy Christensen named her gingerbread display 1st Christmas in Cache Valley. It can be found at Stork Landing, 99 West Center Street in Logan 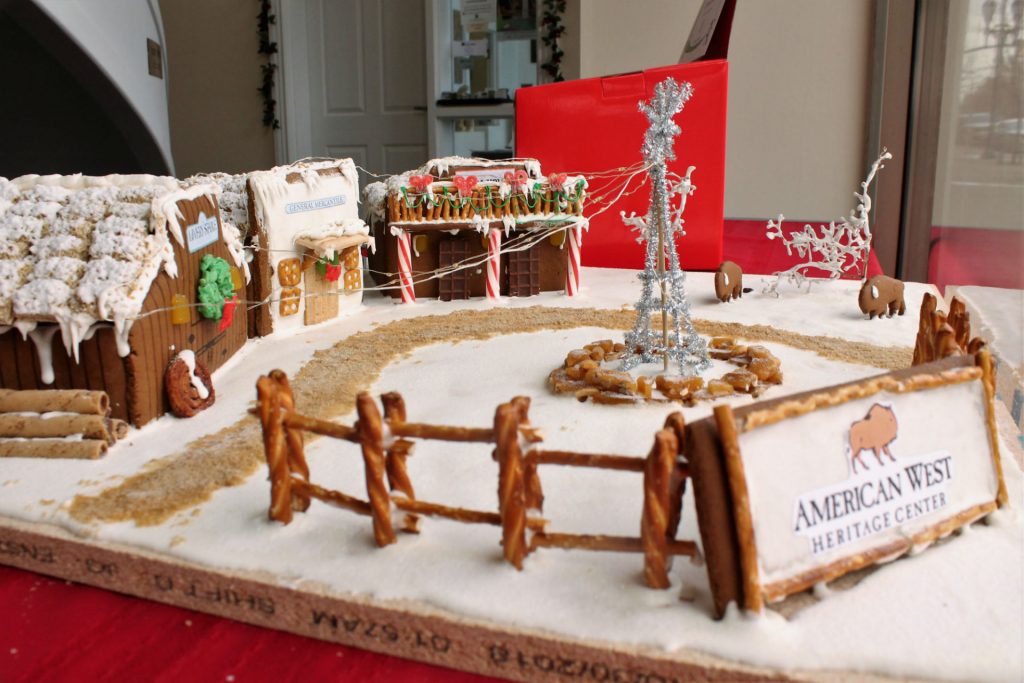 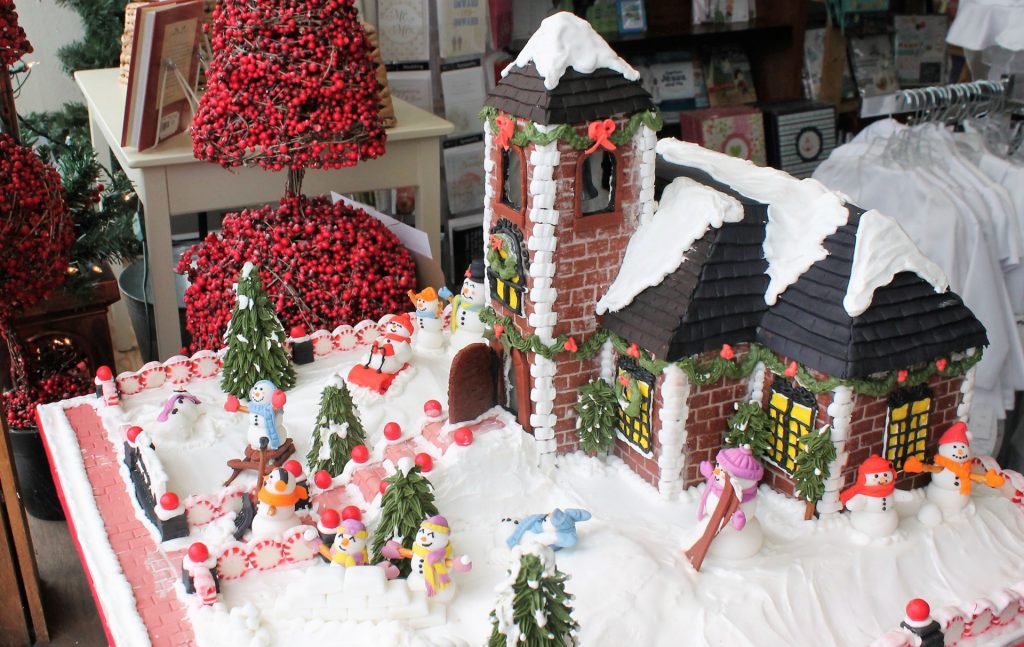 The Book Table, at 29 South Main Street has on display the display a creation by Sue Ann Salmon named “Old School House.” 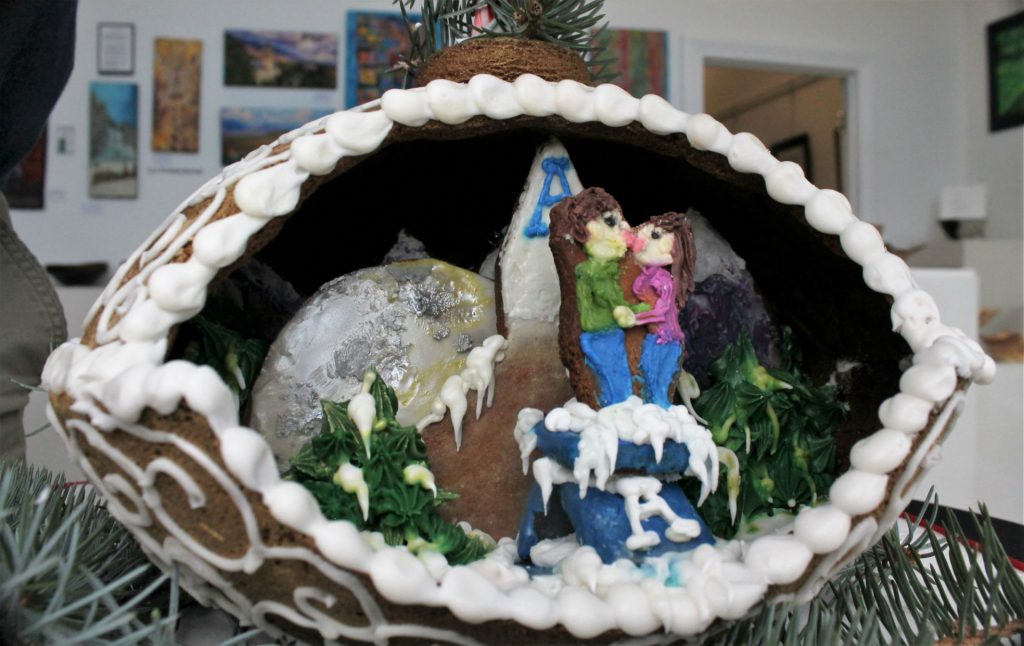 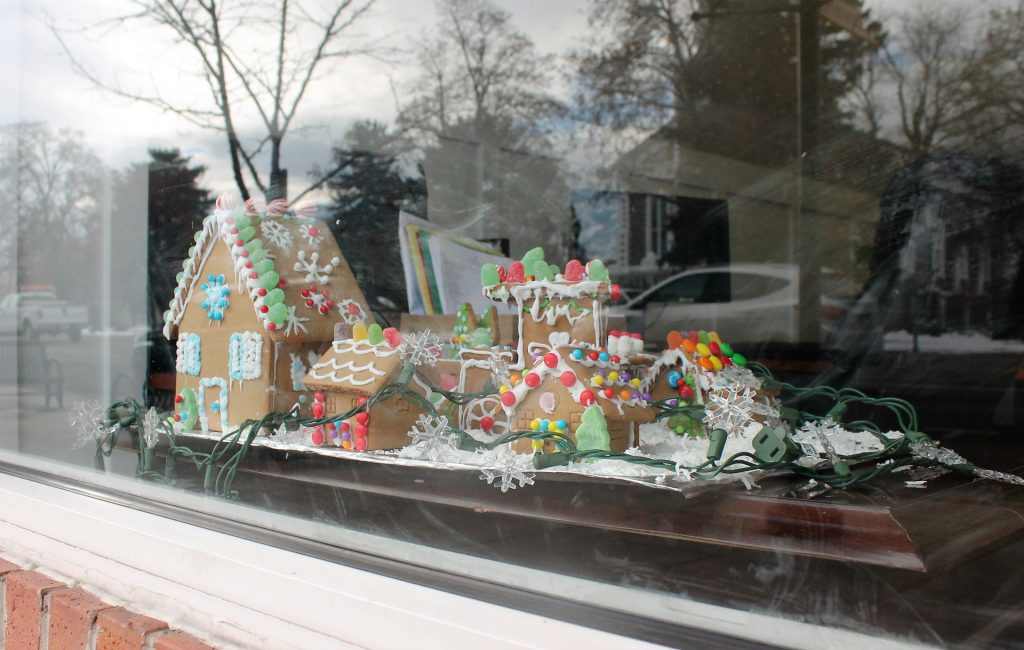 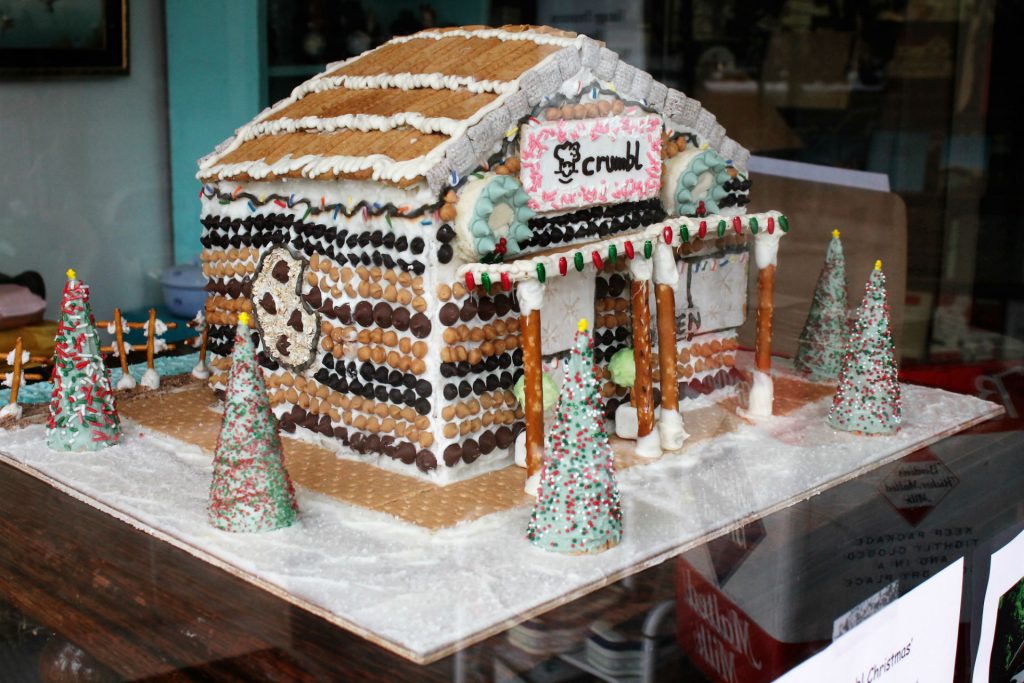 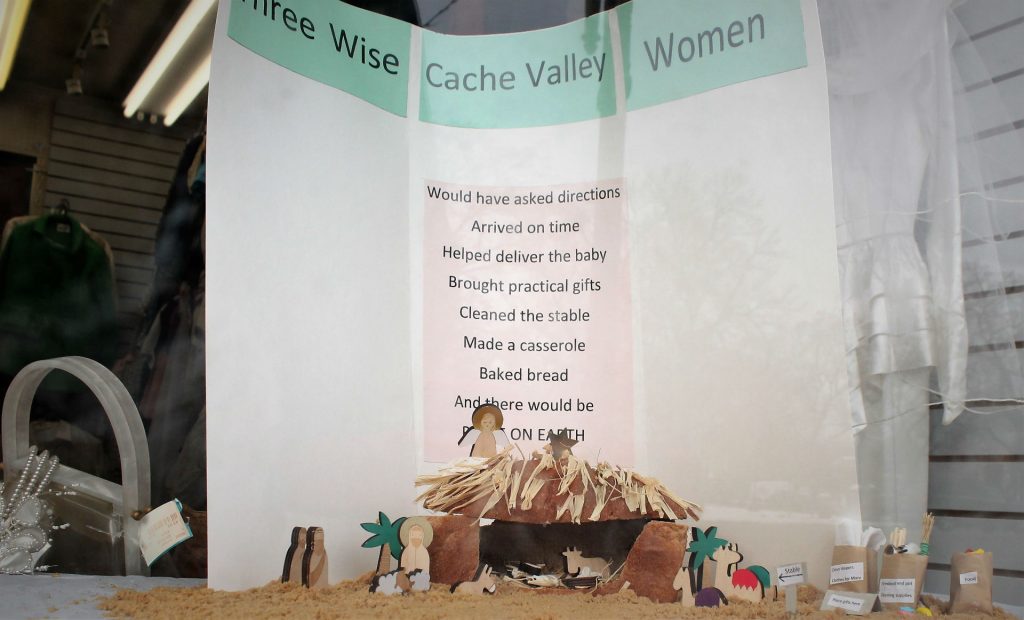