COLORADO SPRINGS – The Mountain West has agreed to six-year media rights deals with CBS Sports and Fox Sports that are worth a combined $270 million. The agreements include football and men’s basketball.

There are additional third-tier rights still in negotiation. This marks the inaugural arrangement between Fox and the league. The CBS Sports Network remains the primary television rights holder.

LOS ANGELES – FOX Sports has reached a six-year media rights agreement with the Mountain West, marking the first-ever relationship between the network and the Conference. Beginning in 2020-21 and running through 2025-26, FOX Sports will broadcast a robust selection of MW content.

FOX Sports will have exclusive rights to Boise State home football games and to the Mountain West Football Championship game, which will be televised annually on the FOX family of networks. In addition, a full slate of MW football and men’s basketball games will be carried each year across the various FOX Sports linear platforms.

“FOX Sports is pleased to add the Mountain West to our roster of top-tier collegiate athletics partnerships,” said FOX Sports President, National Networks, Mark Silverman. “We look forward to showcasing these exceptional programs, coaches and student-athletes in the years to come.”

“The Mountain West is excited to begin this next cycle with FOX Sports as a new partner,” said MW Commissioner Craig Thompson. “The relationship allows us to be part of the network’s growing collegiate programming and we look forward to working together toward mutual success. This agreement positions us well now and for the future.”

“This significant partnership provides essential exposure and revenue advancements to the Mountain West and its member institutions,” said Noelle Cockett, President of Utah State University and chair of the Mountain West Board of Directors. “It will contribute to the continued development of our individual athletics programs and, by extension, our collective efforts to advance the Conference.”

CBS Sports Network will continue to serve as the primary television rights holder, airing the conference’s best football and men’s basketball games. The network also will televise an additional 10 games of each sport per year.

“Given both the strength of the Mountain West Conference and success of our partnership over the past 15 years, continuing our long-term relationship with the conference was a priority for us,” said Dan Weinberg, EVP, Programming, CBS Sports. “Retaining the conference’s top games for CBS Sports Network is important and builds upon our already strong schedule. We look forward to an exciting future with the conference in the years ahead.”

“The Mountain West is pleased to enhance and strengthen our mutually beneficial association with CBS Sports,” said MW Commissioner Craig Thompson. “We are particularly excited about the opportunity to showcase our strong brand and premier football and men’s basketball teams on CBS Sports Network and the CBS Television Network. Our member institutions appreciate the commitment being shown to the Conference by CBS Sports.”

The CBS Television Network also will broadcast select football and men’s basketball games throughout the agreement, including the Men’s Basketball Championship – which has been on CBS since 2013 – with an automatic berth to the NCAA Division I Men’s Championship on the line. 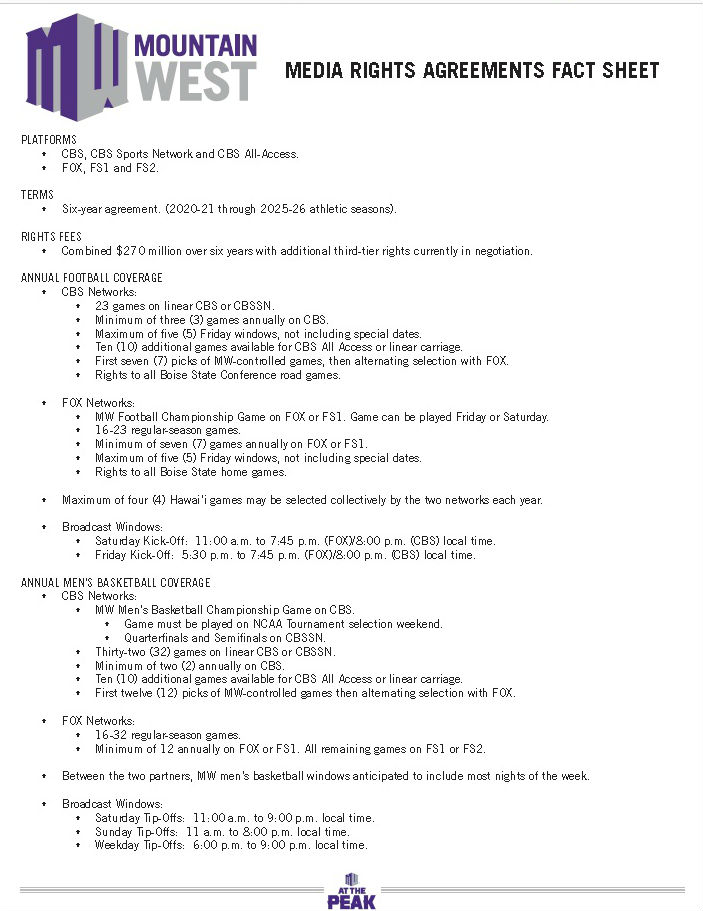