LOGAN – Chris Wilson, owner of Wilson Motor Company in Logan, announced he is running for a senate seat in District 25. 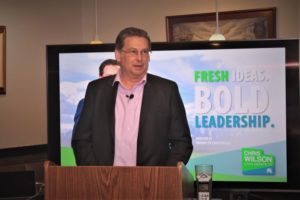 Wilson formally announced the news Tuesday afternoon at Angie’s Restaurant in front of a crowd of family, friends and supporters.

The local businessman is challenging Lyle Hillyard who has held the senate seat for 36 years.

“I’ve known Lyle for many, many years. My family and I have supported him,” Wilson said during a recent interview. “I just feel it’s time for a change. I think it’s time for fresh ideas and a fresh approach.”

Wilson said he struggled with the recent approach Sen. Hillyard took on tax reform during the 2019 special legislative session last December. A bill, passed by legislators was repealed the first week of the 2020 legislative session after a referendum opposing it garnered widespread voter support.

“I think the word was there was crisis in our budget and that things needed to be done now before the sky was falling,” he said. “Legislators decided they were going to take a year off and not address those issues until after the election. A lot of people have approached me, recently, with concern that the will of the people was not listened to and not followed.” 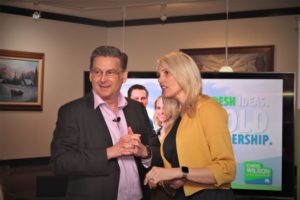 Wilson was born and raised in Logan and upon graduating with a bachelor’s degree in business finance from Utah State University, joined the family business, Wilson Motor Company.

“We’ve been able to build our business on listening to our customers and then providing for them the best possible experience,” he said. “I think that’s the same model we should use in politics. We should listen to the people, gather information, look for solutions and alternatives and then act on those with efficient and effective solutions.” He added, “then make sure and monitor those solutions to ensure we are reaching the kind of return for the money invested.”

In his announcement speech Tuesday, Wilson explained he was running in an effort to address a “pervasive negative atmosphere” and “a culture of being out of touch.”

“Our public discourse is going downhill and is fostering arrogance, disrespect and disregard for voters,” he said. “This can lead to incumbent isolation and politicians whose grip on power outweighs the wishes of the constituents. We need a culture of active listening, responding and reacting to the will of the people.”

He added, “Out with the old, in with the new. This election is not going be about the past. It is about shaping our future.”