LOGAN – With the game largely decided in the opening minutes, Saturday night at the Dee Glen Smith Spectrum morphed into a sending-off party for departing seniors Sam Merrill, Diogo Brito, Roche Grootfam and junior Abel Porter. The Aggies capped off the celebration with a resounding 94-56 win over San Jose State. 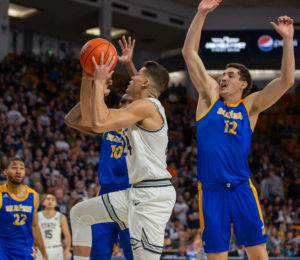 “Definitely a special night, one that I’ve been looking forward or I kinda imagined for a long time,” Brito said. “You go down the line and not one player had a bad night tonight. Everyone was locked in… Like Coach said, they did it for the four of us and that’s something that I really appreciated was all the effort my teammates put in to let us go out on a good note.”

Prior to tip-off, each departing player walked out individually with family members to be honored at center court. Each were given a raucous applause from the audience in attendance.

“Obviously, the fact that I was able to walk on the floor with my parents. This is their first time in the United States,” Brito said. “They were here for the last Wyoming game and they were able to come tonight. Before walking on the floor, I was just telling my mom ‘please don’t cry.’ Because the only way I usually cry in public is if my mom starts crying. It just hits me really hard. But she was able to take some deep breaths. I was just looking at her and I was like ‘you’re doing a good job. Just keep breathing like you are’ and I know I won’t cry because I definitely didn’t want that to happen. So definitely walking with my parents on the floor is something that I’ll never forget.”

Following the Senior Night festivities, Utah State left little wonder as to whether the honored seniors would end their Spectrum careers with a victory. The Aggies opened the game with a 19-0 run, holding San Jose State scoreless for the first 5:55 minutes of the game while shooting 8-12 on the offensive end. 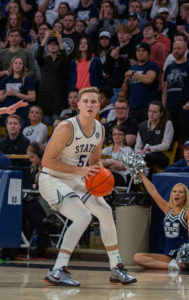 “It was just different,” Merrill said. “I usually go out an hour and 50 minutes before and Diogo was out there shooting before me. Tonight it was a little different walking out there for the last time in warm-ups, and hearing the Scotsman and all that stuff, it was just different. I think we did the best that we could to understand what we’re playing for and not take San Jose State lightly because they’ve been playing some good basketball… Our mindset was great and we did the right things.”

USU’s dominance did not slow down following the opening blitz, as the Aggies held SJSU to only three points over the remaining 8:38 of the first half. Meanwhile, Utah State’s offense enjoyed one of their most electric performances in one half for the season, shooting an even 50 percent from the field and from beyond the 3-point line over the first 20 minutes en route to a 51-14 lead.

“Just a special, special night. You couldn’t have scripted tonight any better,” Merrill said. “It was just a perfect night. I thought our mindset was fantastic leading up to the game and for most of the game… For us seniors, I know it was a special night. I love those guys, Diogo, Abel and Roche. So it was special tonight.”

Excluding a brief 11-1 run by the Spartans, the second half was a continuation of Utah State’s first-half romp. USU’s vast margin allowed the opportunity for Merrill, Brito, Grootfam and Porter to each receive a standing ovation as they were subbed out in rapid succession in the final minutes. The lead ballooned to as large as 43 points as the Aggies cruised to the final margin of 94-46. 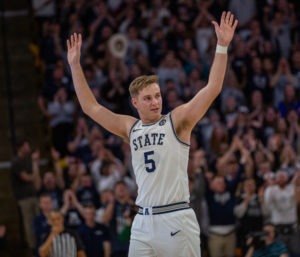 “I tried to not think about it,” Merrill said of playing his final game at home. “Everyone knows I grew up a Utah State fan, and my grandpa has seats on the second row right behind our basket so literally right next to our bench. I haven’t let my parents sit there for the four years, just because my dad likes to yell and I’ve just had them up in the players’ seats. Tonight, they sat down there. Just checking out for the final time and hearing all those fans and then being able to embrace my teammates and turning and seeing my parents there and my wife is when it hit me. It was, like I said, a really great night.”

In the capstone to their careers in the Spectrum, the quartet of Merrill, Brito, Porter and Grootfam each showcased what endeared them to Aggie fans over recent years. Merrill finished with 18 points on 5-12 shooting with seven assists. Brito pitched in another all-around performance with six points, five rebounds, five assists and two steals. Porter ended with another well-rounded game featuring six points, six rebounds and two assists.. Grootfam recorded four points and two rebounds, all in the second half, including a thunderous and posterizing dunk in the closing minutes. 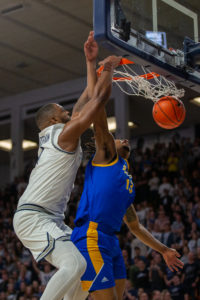 “It’s a great feeling,” Brito said of Grootfam’s dunk. “You love all your teammates. I definitely do love all my teammates, and if there was one guy that you wanted to have a special, shining moment, it was Roche. There’s not a lot of guys that I’ve seen in my 18 years playing basketball that bring so much energy and make their presence known so much in every practice… He’s someone that I was really rooting for to have that one special moment, that one special play. And he was hunting it, you could see. I didn’t have a problem with it. He could take 20 shots for all I care. Seeing him do that was really special, because I was really rooting for him.”

Aside from the seniors, the rest of the Aggies put up quality performances on the night. Sophomore Neemias Queta dominated the paint with 23 points and 10 rebounds. Sophomore Justin Bean recorded his 15th double-double on the season with 12 points and 13 rebounds. Junior Alphonso Anderson added 11 points and seven rebounds.

“What an exciting night. I think that will be a memory that all four of those (seniors) will remember forever. You could just see it,” head coach Craig Smith said. “I said this in the locker room after the game: all of our guys it felt like were just playing for (those seniors). It’s amazing what you can accomplish in life when you don’t worry about yourself and you do things for others. And it’s so rewarding and it’s so humbling and peaceful and all of those kinda things at the same time. That was fun to see and hopefully we can keep this momentum going the rest of the way.”

With the win, the Aggies moved to 23-7 on the year and 12-5 on the season in Mountain West play. Utah State will close out the regular season on Saturday at New Mexico, where USU could secure the second seed in the MW tournament with a victory.

Tip-off versus the Lobos is currently scheduled for 8:00 pm MST.