LOGAN — A 5.7 magnitude earthquake shock residents awake throughout northern Utah and southern Idaho Wednesday morning. According to the University of Utah seismograph station, the quake was reported to have occurred at 7:09 a.m. near Magna. 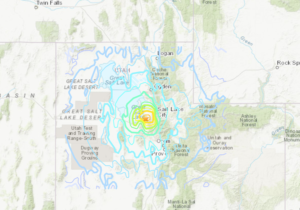 The U of U seismograph station recorded that the epicenter of the quake was approximately 6.6 miles below the earth’s surface. More than 20 aftershocks have been recorded, between 4.4 and 2.8 in magnitude.

An interactive map from the U.S. Geologic Survey, in coordination with the University of Utah, shows the quake was felt by residents from Nephi to Preston, Idaho, and Kemmerer, Wyoming.

According to Logan City Police Dispatch, there were no reports of any damage as a result of the quake, other than a few shaken residents. Police officers were dispatched to power substations and water treatment centers, to make sure the city’s infrastructure was safe. The Cache County Sheriff’s Office initiated their Emergency Operations Center as a precaution.

Logan City Spokeswoman Emily Malik said everything is looking good and functioning normally at this time including water distribution and wastewater collection infrastructure and facilities. We have no reports of power outages.

The earthquake caused structural damage to buildings, roads and waterlines in the Salt Lake Valley. No major injuries have been reported.

Daniel Woodruff, spokesman for the Church of Jesus Christ of Latter-day Saints, said the Salt Lake Temple, which is undergoing a seismic upgrade, sustained some minor damage. The trumpet on the Angel Moroni statue fell off, and there is minor displacement of some of the temple’s smaller spire stones. No workers were injured. Crews on the job site have been sent home for the day, and a full assessment is underway to determine needs going forward.

Woodruff explained that Wednesday’s earthquake emphasizes why the upgrade project is so necessary to preserve this historic building and create a safer environment for all patrons and visitors.

In January, a 3.1 similar earthquake was reported in Box Elder County. It was felt by residents in Tremonton, Brigham City and portions of western Cache Valley.

The U.S. Geologic Survey began recording earthquakes in Utah in 1847. Since then, the largest ever recorded was the 1934 Hansel Valley earthquake, north of the Great Salt Lake, which was 6.6 magnitude. Also, the 1901 earthquake near the town of Richfield, was estimated at 6.5 magnitude.