LOGAN – The Sterling Scholar program, now in its 48th year, annually recognizes senior high school students throughout Utah who excel in more than a dozen different categories. Finalists for each school were selected by a panel of judges earlier this year and then went on to compete on a more regional level. The state is broken up into five different regions with winners and runners-up announced just last week. Students from Cache and Box Elder counties competed in the Wasatch Front Region, while students from Rich County competed in the Northeast Region.

Two students from Logan High School received runners-up accolades: Taylor Fang for English and Laurie Reeve for Computer Technology. Both students will receive $1,000 scholarships in addition to scholarship opportunities from colleges and universities.

Fang was also recently recognized by the Utah High School Activities Association Academic All-State team for her academics and achievements in Forensics and Debate. Last summer, Fang was recognized as one of five teens across the country as a National Student Poet.

Due to coronavirus concerns, the annual awards ceremony regularly scheduled for March 19 was canceled and students were instead informed via email. 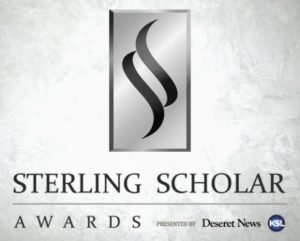 There were over 1,000 nominees from nearly 100 high schools throughout the state. The Deseret News and KSL developed the Sterling Scholar program to focus attention on outstanding seniors and award cash scholarships and tuition waivers from participating institutions.