LOGAN – Young children have been limited in their ability to play on playgrounds and with groups of friends. School dismissals and social distancing have caused many of these children to be stuck at home. Businesses in Historic Downtown Logan are coming together to give some relief. 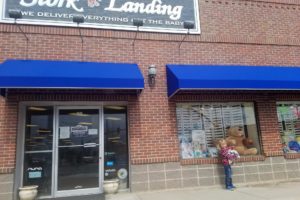 On Wednesday, April 8th, numerous downtown businesses are hosting a Teddy Bear Hunt. Jenilyn Needham, owner of Stork Landing, says business owners wanted to give families something to do outside while also inviting them downtown, especially on Center Street.

“We have these new sidewalks that have been put in, the pansies have been planted, and the sidewalks are so wide you can walk them and not be within six feet of people,” Needham exclaims.

She says people can explore shop windows either on foot or in vehicles to spot Teddy Bears in shop windows, and the concept is modeled after the Michael Rosen children’s book “We’re Going on a Bear Hunt.”

“If you’ve read the book, they talk about going through obstacles to go on a bear hunt together as a family,” she explains. “So, we’re going on a bear hunt through downtown. If you take a picture by various bears throughout downtown, either by car or by foot, you get entered into a drawing for a Bear Hunt Basket Giveaway.”

Needham says to just tag Stork Landing in your photos to be officially entered into the contest. Once a group has found and taken a photo with all of the bears, they can submit their photos to Stork Landing via Facebook messenger or email storklanding.sales@gmail.com to be entered into the drawing. The participating businesses will be identified on a list that can be downloaded or printed from shopstorklanding.com, on the store’s Facebook and Instagram pages, and available at the store for pick up.

“If kids pop in to Stork Landing, we also have little treat bags ready to hand out to kids as they’re walking around and driving around, that they can munch on with stickers inside.”

The activity will be available for participation from 10 a.m. to 6 p.m. on Wednesday.

“It’s good for the businesses to work together and to create a fun adventure for kids and families to go on a bear hunt in downtown Logan.”