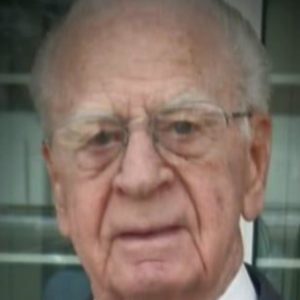 Rendell Mack Seamons, “Tick” by all who knew him, passed peacefully into the loving arms of his sweetheart on the eve of April 13, 2020, in Hyde Park, Utah.

Born March 1, 1924, the fourth child of Harvey and Melba Seamons, Tick lived in a home full of music with his father and brother playing saxophone and trombone, sisters playing piano and singing, and Tick playing his trumpet. He accompanied his father many nights of the week with the band at local dances. Oh, how he loved his big band music! He played big band music for dances at the Elite Hall and other locations throughout the counties. He enjoyed playing in parades and concerts with the community band, and taps for military funerals. His eyes would close, his head nodding and his fingers beating out the tempo as he would go back in time, lost in memories of days gone by. Family and neighbors alike, regaled being outside on a warm summer night, listening to Tick play his trumpet as the tunes would waft through the evening air. As one grandchild so lovingly stated, “heaven gained one heck of a horn player”!

At the age of 18, Tick valiantly served his country in World War II as a radioman aboard a B-24 bomber in the South Pacific Theater. He solemnly shared with his family, harrowing bombing raids, reconnaissance over enemy islands, and crash landing on an airfield. His crew knew that anytime Tick flew with them, they would make it back to base alive, and the friends he made with his crew and the jokes they would play on one another were always remembered.

Once home from the war, Tick attended Utah State University, receiving a Bachelor’s, as well as his Master’s degree, in Education. He taught English, Business, and Utah history in the Logan School District until his retirement in 1988-89. His students often heard loving, yet teasing, stories about his wife. He often said he had the best profession in the world. He loved teaching. During the summer months Tick worked with the US Forest Service fighting forest fires, painting campground signs, making trails and other field work.

If you were to ask Tick how his day was it was always the same tongue-in-cheek answer, “work, work, work. The sun won’t shine and the fish won’t bite…” His grandkids always heard how he milked the cows and fed the chickens all day. It was uphill and in the snow both to and from places. The girls were his “funny faces”, and the boys were his “pals”.

Tick met his sweetheart, Rhonda Raymond, at the young age of 12 and 10. Her being from Smithfield and he Hyde Park. They sure had an eye for one another. From that time on she was always his girl. After the war and after Rhonda completed her nurses training in Colorado, they were married in the Logan Temple on June 6, 1947. They built their loving home in Hyde Park raising 4 beautiful children; Nancy, Jay, Renee, and Clayton. In February of 1982 Rhonda passed away from a heart attack, brought on by years of chronic asthma and the treatments used. Tick remained ever devoted to his beloved sweetheart. Until only recently, if you were to ask him how long she had been gone, he could tell you the years, months, weeks, and days it had been. What a joyous reunion when they were finally reunited.

Tick has always been a faithful member of the Church of Jesus Christ of Latter-day Saints, serving in many capacities. He enjoyed serving in the Logan Temple, checking member recommends for 20 years. His faith in the gospel is what got him through the war years and kept his eye towards reuniting with his sweetheart for eternity.

We wish to thank Autumn Care Assisted Living Center, as well as Hospice for Utah, for the loving care they provided these last months of our dad’s life.

Due to the COVID-19 pandemic, we will do a drive-by viewing at the Hyde Park Cemetery on Saturday, April 18, 2020 from 11:30am – 1:00pm. Entrance is on the west side exiting to the east. The family requests that you stay in your cars. Military honors will follow the viewing with a live Facebook service. To connect to the Facebook live video please search for Julie Morris Seamons.