SMITHFIELD – With state championships in football, swimming, and boys soccer, a runners-up finish in boys basketball, a quarterfinals finish in girls soccer and many other Region 11 and individual accolades in the last 12 months, it is no wonder the man who oversees all of Sky View High School athletics was recently recognized by a national organization. Sky View Bobcats Athletics Director Ryan Grunig was recognized this week as the top director of athletics in the state of Utah for high school and middle school athletics. 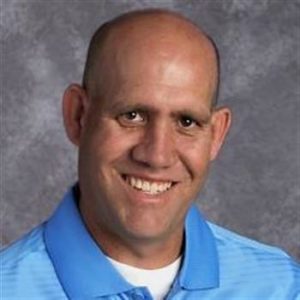 On Tuesday, the National Interscholastic Athletic Administrators Association announced that Grunig had received the State Award of Merit from their Utah chapter.

“It was a great honor for them to see the success at Sky View High School and the things that are going on, but also to select me because there are so many great athletic directors,” Grunig exclaimed. “I can think of every athletic director in our region, and I know a lot of them throughout the state. It was quite an honor to be selected, and a humbling experience to be selected by my peers.”

Normally, athletic directors from throughout the state would be gathering together at this time of year and Grunig would be awarded the honor in front of all of his peers at a special presentation. But because of the coronavirus pandemic, Grunig said the annual conference has been rescheduled to August and the national awards were already revealed.

Grunig praised his coaches and the Sky View students for their successes, making it easy for him to receive such a recognition.

“I think the secret is we’ve got great kids that, first of all, excel in the classroom,” Grunig said. “We have super high GPA’s and as a coaching staff and athletic department, we’ve always said that success in the classroom translates to success on the field. They take that success and they come out and work hard.

“We have an amazing group of coaches who care about the kids. The kids know that they’ll do anything for them and as a result they work really hard and they buy into the plans the coaches come up with and execute them. But then we also have a group of coaches that know we plan but yet let our kids execute, and use their strength. We don’t try to pigeon hole what they do.”

Grunig feels really bad about the spring sport athletes, particularly the seniors, who have had their seasons cancelled because of the pandemic. The school has posted senior banners with team pictures along the exterior fence of the school’s football stadium. A petition by some spring sport athletes is asking Utah Governor Gary Herbert and the Utah High School Activities Association to allow spring sports to continue. As of the time of this publication, over 5,600 people have signed the petition. High school athletes even created a video to accompany the petition, titled ‘Let Us Play‘, which has over 21,000 views. Grunig appreciates the students’ passion, desire to play and to be a part of the solution, but doesn’t see it working.

“Still, our first and foremost priority is for the safety of our student athletes, our coaches and their families,” Grunig said, “also to follow the directives given by the local health department, the state health department and then also the governor’s office, to do our part to flatten the curve and to get this pandemic past so we can return to a normal life of having high school go on as it normally does along with sports and all the great things that take place there.”

The state of Utah released guidelines for coaches on Tuesday, April 21 on how to interact with their teams. Organized practices are not allowed to take place but coaches can meet remotely with their athletes through video conferencing. Grunig said the state is now allowing coaches to break down game film with their teams and have team meetings.

“They’re concerned about the mental health of these kids, and coaches have such an impact on their lives,” Grunig added. “They want them to be able to interact with their coaches but do it safely.”