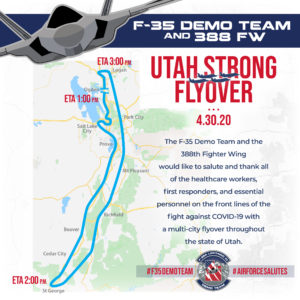 LOGAN — As a salute to those on the frontlines in the fight against COVID-19, as well as everyone staying at home to “flatten the curve,” a team at Hill Air Force Base will be conducting a flyover of Utah. The Air Force F-35A Lightning II Demonstration Team and 388th Fighter Wing will perform the four jet formation flyover Thursday afternoon and is expected to be over Cache Valley at approximately 2:55 p.m.

Public Affairs Officer Capt. Kip Sumner said the flyover is to thank health care workers, first responders, military members and essential personnel, as well as those who are staying home. It also provides training to the pilots, and demonstrates the readiness of the Air Force.

“We wanted to find a way to show our appreciation to those that are here defending the home front,” said Capt. Sumner. “As a fighter wing and as the F-35 fighter performance team, one way that we felt we could show that small appreciation is with a formation flyover, to give a salute to everyone out there.”

The flyover is being called Utah Strong. It is part of a larger national initiative, Air Force Salutes.

Capt. Sumner explained that the flyover is scheduled to begin at 1:00 p.m. and proceed south. They are expected to flyover northern Utah around 2:55 p.m.

“We are going to takeoff from the base and proceed south along I-15 to Salt Lake, where we are going to do a small S turn throughout the city. From there we are going to keep proceeding southbound to St. George, before looping over to the other side of the interstate mountain range, and then flying back up north to Park City. Should our fuel allow for it once we get to that point, we are going to hit Logan and North Ogden.”

Maps show the fighter jets will fly into Cache Valley from the south and then turn west over Logan, continuing over the north end of the Wellsville Mountains into the Bear River Valley. They will then rejoin I-15 and continue south over Tremonton, Brigham City and back to Hill Air Force Base.

Capt. Sumner said most residents in the valley should be able to observe the flyover from the safety of their homes. He also discouraged travelling to lookout spots or gathering in large groups to view the event.

“We are going to be flying about a thousand feet above ground level. It will be a four ship formation. The jets will be travelling at about 300-400 knots, which is about the same conversion to miles per hour.”

The flyover will be led by the F-35A Demo Team pilot, Capt. Kristin “BEO” Wolfe. Three combat-ready F-35 pilots from the 388th Fighter Wing will be flanking her wings.