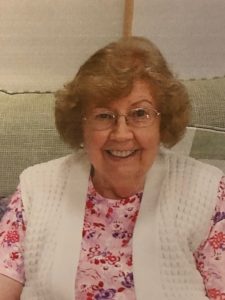 Barbara Ruth Cook Frost was born on March 26, 1937 to Jesse Darrel and Thelma Ruth Hamblin Cook in Roy, Utah. She passed away on May 21, 2020 after a long struggle with cancer.

Barbara attended Ogden High School where she was active in student government and served in a leadership role her senior year. It was there she met the love of her life, Ray Frost. They were married in the Salt Lake Temple on October 7,1956. They started their life in Roy and settled in Bear River City, Utah. Along the way, they had six children.

In the early years with six children, vacations typically involved a camper and a road trip. Destinations included North Dakota, California, and Mexico, that likely fostered the beginnings of her gray hair. Once the kids left home, Ray and Barbara enjoyed traveling abroad, including places like Russia, China, and Denmark.

While raising a large family, Barbara attended Weber State College where she graduated with a Master’s degree in Elementary Education. She taught at Bunderson Elementary in Brigham City for many years until she retired in 1999. She was a teacher by profession and a caregiver by nature.

A private family graveside service will be held on Saturday, May 23, 2020 at the Bear River City Cemetery.

In lieu of flowers, the family respectfully requests you consider a donation to the cancer charity of your choice.

The family would like to thank Encompass Home Health and Hospice for their incredibly compassionate and caring service.