LOGAN – Monday’s Bear River Health Department report showed a marked decrease in positive tests in the district on a day when the state reported the percentage of Utahns testing positive last week grew considerably to 7.1 percent. That number has been a consistent 4.6 percent since the start of the pandemic.

The 19 new COVID-19 positive cases in the Bear River Health District are the fewest in nearly a week, although BRHD Director Lloyd Berentzen said Sunday he expects more daily reports with inflated positive tests due to extensive testing continuing in the district. Hundreds of tests were performed at JBS in Hyrum on Saturday.

All 19 of Monday’s cases were found in Cache County with two individuals under 18 and 17 between the ages of 18-60. The district’s total cases have grown to 267 positives: 238 in Cache County and 29 in Box Elder County with none in Rich County. Nearly 6,700 tests have been performed in the Bear River Health District and 78 patients are considered “recovered.”

Also on Monday, the department released more detailed demographic information about those who have contracted the virus. The Hispanic/Latino population has been affected the most. While accounting for less than 10% of the total population in the Bear River Health District, Hispanic/Latino residents account for over 40% of positive cases (with 102 recorded positive cases). The district’s White alone residents make up nearly 84% of the population, but have accounted for less than a quarter of the positive cases (55 total, or 22%).

The Utah Department of Health’s total positive COVID-19 caseload stands at the brink of 10,000 (9,999) a daily rate increase of 2.1 percent from yesterday. With 4,198 tests administered yesterday, 218,112 Utahns have been tested and the rate of positives for the last two and a half months is still at 4.6 percent. 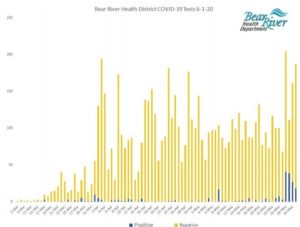 There were no coronavirus deaths the last 24 hours; 113 Utahns have died from COVID-19.

The Monday afternoon Idaho report shows 2,906 confirmed COVID-19 cases and 83 deaths. One positive case in Franklin County was recorded last week. There are still none reported in Bear Lake and Oneida counties.