LOGAN – While working on a class project at Utah State University when pursuing a master’s degree in education, Jimmy Moore began to share stories about his background growing up in the deep south and his journey as a basketball player at USU. The feedback was so encouraging, he decided to eventually put the stories into a book. After formally retiring from USU as an administrator, Moore took time to write his stories down to also be a legacy for his boys, Jalen and Grayson. 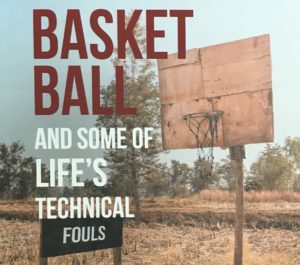 The book is titled “Basketball and Some of Life’s Technical Fouls” and it follows Moore from a child growing up in Leakesville, Mississippi, to playing basketball at Utah State, playing professionally in the NBA and in Europe and eventually coming back to his alma mater as an assistant coach. When Moore reached out to five different publishing firms about his book, he hoped one might show some interest. All five wanted his manuscript.

But the book isn’t just about basketball and Moore’s achievements on the court. If there’s one thing Moore hopes people learn the most from his book, it’s to understand how strong his parents were.

“We had the buses with the windows that wouldn’t go up; you couldn’t raise them up in the wintertime. Those are the things I want people to take away from the book, but the number one thing is my parents, how strong they were…to have 12 kids and give us all an opportunity to go to college.”

Moore was recruited to Utah State by legendary coach Dale Brown. On a recruiting visit, Brown was in the Moore home and wanted to grab some food for the family while they talked about Utah State. He asked Jimmy to come along and help him find some hamburgers. The only cafe in town that was open at that time did not serve black people. When they arrived at the cafe, Jimmy stayed in the car.

“‘You’re kidding right?’ I said, ‘No. You see that little square window right there, sliding window? That’s where we order if we want a burger. We have to go to the window.’ He said, ‘You’ve got to be kidding me, right?!’ And I said, ‘No, I’m not.’ He said, ‘Get out. We’re going in here tonight!'”

Moore went on to explain that as a sheepish 17-year-old, he didn’t want to upset Coach Brown, but knew what would happen if he went inside. He said he wasn’t prepared for what happened next.

Moore said that experience that day was a life changer. He said he never felt so low and so small, but promised himself that he would never let another human being feel that way and have a similar experience. That motivation served him well after his basketball career while serving as an administrator at USU, helping students receive financial aid and finding ways to help them continue their education endeavors at the university.

Moore was a successful basketball player at USU from 1972-1975 and finished his Aggie career with 1,164 points and 652 rebounds and still ranks high on the school’s all-time scoring and rebounding lists. He was placed on USU’s All-Century team in 2005 and was inducted into the Utah State Athletics Hall of Fame in 2013.

Coming from the deep south to Logan, Utah was a culture shock for Moore, who was the only African American player on the team during his freshman year. But he praised his teammates, coaches and the people of Cache Valley for their inclusiveness and friendship.

“I never once went into a game or went into another city to play a game feeling like they did not have my back. I was shocked at the time to see the culture shift. It was quite an experience for me. I quickly learned there were some great people in this valley and still are today.”

But that doesn’t mean that Moore, or his family, haven’t encountered racism in Cache Valley over the years. He said that, despite all the success Jalen had in high school and at USU, he also experienced racism.

“I’ve always talked to him about being different, but not using that difference as a weakness, being proud of who you are and where you come from.”

While Jimmy hopes people realize how strong his parents were for him, he also wanted to write the book as a keepsake for his boys.

After graduation, Jimmy played two seasons for the Seattle Supersonics in the NBA and spent 10 years playing internationally. Moore returned to USU to be an assistant coach under Rod Tueller in 1987 and remained an assistant until 1992. He transitioned from an assistant coach to an administrator at USU until retiring just a few years ago.

Moore’s book “Basketball and Some of Life’s Technical Fouls” is printed by Newman Springs Publishing and is available online at the Apple iBooks Store, Amazon or Barnes & Noble.