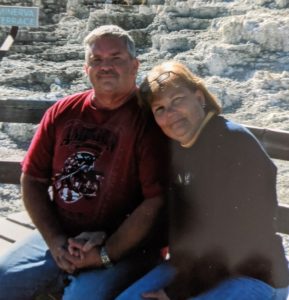 Karen Ellis Spackman, our beloved wife, mother, and grandmother returned peacefully into the loving arms of our Heavenly Father on June 26, 2020.

Karen was born to Richard and Irene Ellis on March 25, 1957, in Provo, Utah. Shortly after Karen’s birth, her mother passed away. When she was 2 years old her father married Edith Peay. Together they raised Karen and her older brother.

She graduated from Spanish Fork High School in 1976. Then she worked in a sewing factory.

In October 1977, she met her eternal love, Max Spackman on a blind date. They married on February 3, 1978, in the Church of Jesus Christ of Latter-Day Saints Temple in Provo, Utah. Then they moved to Cache County where they raised their family.

Karen retired from Utah State University. In retirement, they moved to Cub River, Idaho. She enjoyed sewing, crafts, canning, and sharing the food they raised in their garden, attending church, and most of all spending time with her family.

She is survived by her loving husband Max: her three children, Steven, Stacie (Scott), and Brian (Kyllie) and 4 grandchildren, Kordell, Emma, Madison, Viviana. She was preceded in death by her mother, father, step-mother, brother Richard, and a grandson Dominic.

“Then shall the dust return to the Earth as it was: and the spirit shall return to God who gave it. (Ecclesiastes 12:7)”

At Karen’s request, no funeral services will be conducted. A family memorial service will be held at a later date.