LOGAN – The large grassy area directly to the east of Utah State University’s Old Main building is affectionately referred to as The Quad. It’s an iconic space used for lounging students, festivals, concerts and now, a gigantic American flag. USU grounds crews mowed a Stars and Stripes into the grass that spans the entire quad from east to west. Shane Richards, Landscape Operations and Maintenance Manger for USU Facilities, said his crew got the idea to do something like this a year ago, but were a little too late. 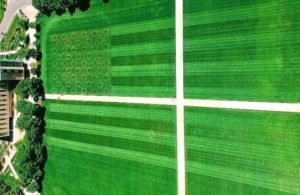 “We actually saw a Facebook post that someone did it in their front yard, and we thought that was a great idea,” Richards said in a video posted by the university. “It was probably a little too close to the 4th of July, so we brought it up this spring and said, ‘Do we want to try something like this for the 4th of July?’ The consensus was we had enough people that were excited about it so let’s give it a shot.”

Richards said he began planning the design and assembling the necessary number of crew members earlier this spring. A template star was built that crews could mow around and the biggest concern was that all the stars line up properly and the 13 stripes would be straight.

“For the first time it’s all right,” Richards exclaimed. “All 50 of our stars ended up being straight and okay. That’s what our goal was, to make sure the stripes were straight and the stars are straight.”

He said that now his crew has been able to pull it off successfully once, it will be easier for them to plan for it and make it even better next year.