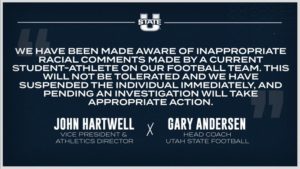 “We have been made aware of inappropriate racial comments made by a current student-athlete on our football team,” their joint statement read. “This will not be tolerated and we have suspended the individual immediately, and pending an investigation will take appropriate action.”

Shaw’s comments came in a back-and-forth exchange with user “dylanbennet89” who posted disparaging remarks about the 4th of July holiday due to the fact that black people were still slaves in 1776.

“Honestly I don’t really care to educate myself on s*** that doesn’t matter,” Shaw wrote. “Y’all have months dedicated to ur (sic) oppressed a**es and still so greedy to have more purely cause history didn’t treat ur (sic) ancestors right.”

Shaw is Junior 6’4″, 285 lb offensive lineman from South Jordan who started in nine games this last season at USU.

According to The Atheltic’s Tony Jones, Gary Andersen planned to have a meeting with the team’s leadership committee to discuss Shaw’s comments.