Demolition crews bring down Ellis Elementary School at 300 North 400 West in Logan on Monday, July 6. The Logan City School District plans to build a new school on the same site.

LOGAN – Ellis Elementary School in Logan has been the oldest, continuously operational school in the state of Utah since it opened in 1893. But now, the old school is being brought to rubble.

Demolition of the old school began in early July and Logan City School District Superintendent Frank Schofield says the district wants the Ellis school to continue to be a cornerstone in the community for another 150 years.

“There are a lot of memories there and it’s been a central holding place for that community for a very long time.”

Schofield says the cost to update the old school vs building a new one was essentially the same. However, a retrofit would make it more difficult to address technology advancements and other opportunities to address the needs of the school community.

Crews will continue to demolish and haul away the remnants of the old school for the next several weeks before work begins on the new building.

“Because of some of the delays of construction that have taken place due to the pandemic, we are looking at…November of 2021,” Schofield explains. “I believe that is roughly what we are looking at for a completion date.

“We were shooting to have it done before the start of school that year. With some of the delays that have taken place due to COVID-19 that has pushed it back a little bit. We will be working with staff and the community on when we move students and staff into the new building.”

Schofield says the new school will have somewhat of a similar footprint as before, but in more of an L-shape along 300 North and 400 West. 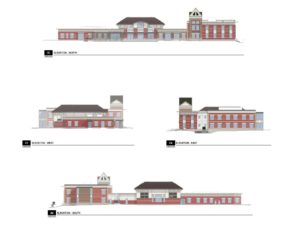 While the new school is being constructed, students who would normally attend Ellis Elementary will be bused to the old Hillcrest Elementary School at 960 North 1400 East. Schofield says that school will be referred to as Ellis East. The district is just wrapping up construction of the new Hillcrest Elementary, which means there will be two operating elementary schools right next to each other for a full year and a half.

“We’ll stagger the start times for Ellis and Hillcrest elementaries so we don’t overwhelm the neighborhood with too much traffic at once.”

The classroom wings for Hillcrest Elementary have been completed, Schofield adds. Final interior work is being performed on the cafeteria and main office spaces, some exterior work needs to be completed and furniture will be delivered soon.

“As with most school construction projects, we’ll still be up to the wire. The week before school we’ll still be moving stuff in, dusting, vacuuming and wiping down windows.”