A file photo of a moose killed illegally. Utah Division of Wildlife Resources was searching for information concerning the poaching incident in Rich County.

RANDOLPH — The Utah Division of Wildlife Resources is asking for any information concerning a moose killed and left to waste in Rich County recently. 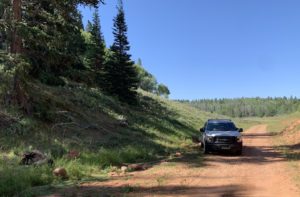 “Conservation officers received a report of a dead moose near Bug Lake in Rich County on July 30,” DWR spokesperson Faith Jolley said. “Officers responded to the area and found the carcass of a small bull moose less than 10 yards off the road.”

DWR officers estimated the bull moose was killed sometime between July 26 and July 28. There is not an open hunting season for moose during that time.

“After performing a necropsy (an examination to determine the cause of death) on the carcass, the officer determined the moose had been shot with archery equipment, based on wound patterns consistent with that of a broadhead arrow,” she said. “Anyone with information regarding the illegal killing of this animal, or any other wildlife, is encouraged to contact the UTiP Hotline at 800-662-3337.”

The perpetrators of this crime may not only have their hunting privileges suspended they may also be fined up to $6,000 for poaching the moose.

“Typically, the penalty can involve paying fines and restitution, but poachers may also face jail time, the confiscation of hunting equipment and the loss of hunting and fishing privileges in multiple states,” Jolley said. “Since we don’t have many details about this poaching incident, it’s hard to say right now exactly what the penalty will be.”

Anyone can report any illegal wildlife activity on the DWR website. If you have information about this specific case, you can also contact DWR Officer Dakota Pray at 385-245-0470. Rewards are available and requests for confidentiality are respected.

Every year, DWR conservation officers conduct numerous investigations into the illegal killing of wildlife. In 2019, officers confirmed 1,080 animals had been illegally killed, valued at over $406,500.