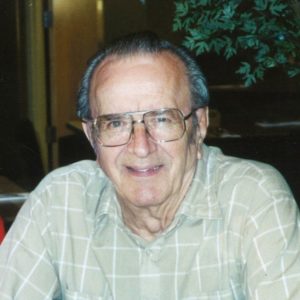 Heinz was born on April 18, 1930 in Detroit, Michigan to Paul and Margot Paetsch Krone.

He joined the Army as a young man and saw combat in the Korean Conflict. Heinz was awarded the Bronze Service Star as well as the United Nations Service Medal – Combat Infantry Badge.

He worked much of his life in the aerospace industry including Lockheed in southern California and Thiokol in Tremonton, Utah. He also worked in Seattle for Boeing and in Fairbanks on the Trans Alaska Pipeline.

Playing Quiddler with his family was one of his favorite pastimes. He was also an avid ice hockey fan and especially loved to watch when “his team” the Detroit Red Wings were playing.

Heinz was preceded in death by his parents and by his sister, Marion E. Krone. He is survived by his wife, Valene, his children Kristine (Thomas) Biggins, Scott Krone, William (Charlotte) Krone, Linda (Dave) Green, several grandchildren and a great-grandson.

The family would like to thank the wonderful people at Integrity including Jody, Brittany and all the kind aids who helped with his care. Also for the kind care of Dr. Lynn Beard.

Click this link to view additional details about Heinz’s Services, including any available live streams: https://my.gather.app/remember/heinz-krone