FILE - In this June 9, 2020, file photo, Sen. Mitt Romney, R-Utah, talks to reporters as he arrives for the weekly Republican policy luncheon on Capitol Hill in Washington. Romney said Friday, Aug. 14, 2020, that politicians attacking the vote by mail system are threatening global democracy but stopped short of criticizing President Donald Trump who has been openly against an expected surge of mail-in ballots, which he worries could cost him reelection. (AP Photo/Susan Walsh, File)

Republican Sen. Mitt Romney is calling on “leaders of all stripes” to “tone it down,” warning that the high-pitched, election-season rhetoric and attacks will lead to “dangerous action” from their followers.

The Utah senator calls out both President Donald Trump and House Speaker Nancy Pelosi in a statement declaring that politics has “moved away from spirited debate to a vile, vituperative, hate-filled morass that is unbecoming of any free nation.” Romney cites Trump’s comments calling Sen. Kamala Harris, Democrat Joe Biden’s running mate, a “monster” and Pelosi “crazy,” among other things.

He charges that Democrats, too, “launch blistering attacks,” though he offers fewer examples: Only the moment Pelosi ripped up Trump’s State of the Union Speech and a recent video by Keith Olbermann, a progressive political and sports commentator, calling Trump a “terrorist.” And Romney, the 2012 GOP presidential nominee, gives a pass to Biden, who he says “refuses to stoop as low as others.”

Romney has said previously he won’t be voting for Trump this fall, but has not said if he supports Biden for president. The moderate Republican has been a frequent critic of Trump and breaks with his party at times on key votes.

Romney goes on to warn that the “rabid attacks kindle the conspiracy mongers and the haters who take the small and predictable step from intemperate word to dangerous action,” adding that it’s “time to lower the heat.” 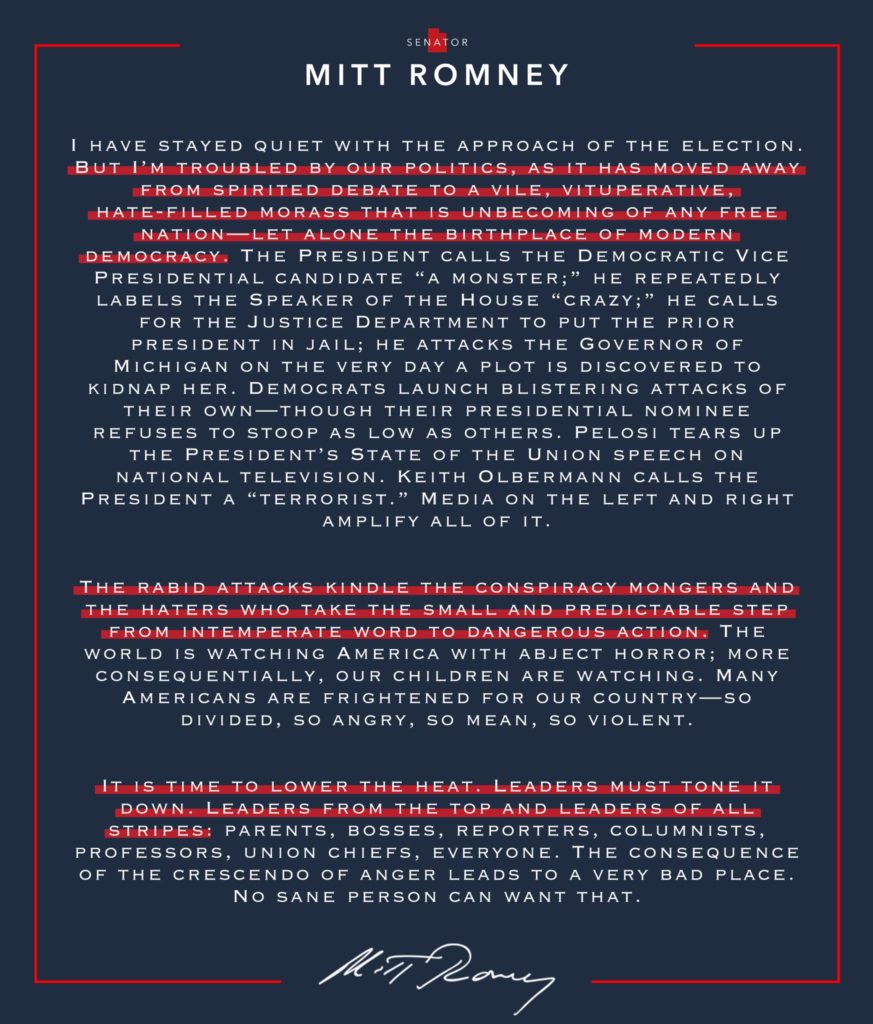