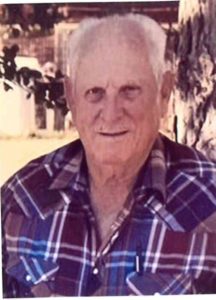 He was born Harvey Howard Kunz on April 21, 1932 at Bern, Idaho, the fourth child of seven to Reuel Victor and Irene Humphreys Kunz.

On September 21, 1950 he married LaRee Hayes of Georgetown, Idaho in the Idaho Falls, Idaho temple and shortly thereafter moved to Georgetown.

In October of 1950 he incurred partial loss of his right hand in an accident at Jones’s Market. Harvey worked on the Wallentine Ranch in Nounan, then at the Union Pacific Railroad station as project chief until he became employed with the State of Idaho Department of Transportation in the engineering department then maintenance which he retired from after 37 years of employment. During part of this time he also milked cows and had a 45 acre farm.

After retirement from the highway department he started working at Beaver Mountain Ski Resort up Logan Canyon for a period of 26 years running the ski lift. Harvey enjoyed working with the people at Beaver mountain and they were good to him. Upon his retirement from Beaver Mountain, they honored him by naming a newly opened ski run on Little Beaver after him, Harv’s Run and presented him with a replica sign. During this time Harvey also worked during potato harvest for Wada Farms for 8 years.

Harvey was a member of the Church of Jesus Christ of Latter Day Saints and served in numerous callings from Deacon’s quorum advisor, Ward clerk, Sunday school and counselor in the Bishopric to Bishop Lloyd M. Smith.

Harvey enjoyed many things, racing horses both on the flat track and chariot racing from which he has a room full of trophies from his success with them. Hunting, fishing, and spending time in the mountains whether hauling firewood or riding the 4 wheeler were other hobbies. He and mother enjoyed a drive out of town to shop or just eat at a restaurant such as Perkins or Golden Corral. Mother and dad were married over 67 years at the time of her passing.

Condolences and memories may be shared with the family at Mathews Mortuary.