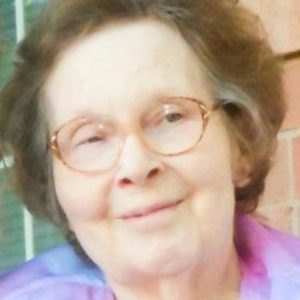 Reta “Bright” Allen Spendlove was born on October 26, 1928, to Zola and Alfred Allen. After a 12-year courageous and long journey of being bedridden, our beautiful and strong-willed Grandmother entered into her loving mother’s arms on October 14, 2020. Surrounded by both earthly and heavenly family members, she gave her all up until her last breath.

Reta was born in Richmond and raised in Cove, Utah. She was the oldest of Dennis Kay and Jay Ellis Allen. She enjoyed her childhood and lived happily as she spent her days adventuring around Cove with her many Allen cousins.

In 1946 Reta met her now eternal companion, Rex S. Spendlove. Grandpa wooed Grandma their freshman year at BYU. Grandpa says that his fantastic jitterbug initially caught Grandma’s attention, but what really won her over was his long eyelashes and thin frame. What she didn’t realize at the time was how much more there was to Grandpa than just his handsome looks. And so their love story began.

During their 71 earthly years of marriage, together they raised one son and five daughters. Grandpas schooling and employment took them cross-country to Ohio, Connecticut and California before returning and making their forever home in Cache Valley, Utah. Once settled, Grandma fiercely stood by Grandpa’s side in all his work, and endless aspirational endeavors, including the creation of Hyclone Laboratories.

A literal “Bright” star in the darkness; Grandma Reta touched hundreds of lives with her compassion and selflessness. Her excellent and at times slightly irreverent humor and quick wit ignited smiles and belly laughs that are impossible to forget. Grandma was often called “Grandma Cuckoo” by her grandkids because she was always silly and surprising them with her next joke or comment. She got her humor from Grandma Allen. It will be terribly missed. The loss of Grandma is large but her release from her never-ending fight and effort is wonderfully divine.

Her occasional toughness, (which the grandkids often referred to as her stubbornness or sassiness) was experienced by most. While she likely intended for her occasional toughness to come across as being firm or establishing that she was in charge, she ended up teaching her grandkids to do the same thing right back to her. She likely didn’t expect things to go that way but through this, she taught many of her loved ones to fight for what is best and not to be afraid to use their voices. Even if they are a little bossy……. Many laughs and great joy came from Grandma being “tough”.

Reta was preceded in death by her parents Alfred and Zola, her brother Dennis Allen, her grandson Connor Braeden Murdock, and her great-granddaughters Grace Emery Falslev and Hazel Mae Arnold.

Valentine’s Day of 2008 Grandpa Spendlove wrote a love letter to his bride. The love they shared both here in mortal existence and will forever share into the eternities is selfless, pure, and Christlike. It is a love story unlike any other. We couldn’t think of a better way to honor her beautiful legacy than to have Grandpa share just a small glimpse of who Grandma truly was. Below is an excerpt from that love letter.

I have given a great deal of thought to the great fortune I have in my eternal companionship with a “choice handmaiden of the Lord”.

I feel you are the most attractive girl I ever dated. It has been said that if you love someone you can see their beauty. I love you and I see your inner beauty; in addition, I feel strongly that you are still very beautiful. What I didn’t appreciate, or consider very much at the time were the many great qualities that you have.

As a mother and as a wife you have been completely selfless. You went without clothes and other necessities, so you could give to the children and me. You excelled as a mother. I know of no other mother who has been more concerned about the welfare of their children.

Very few wives would go through what you have gone through to support their husbands.

We traveled across the country in the summer with little money in an old car that did not have air conditioning, and we stayed in the oldest, cheapest and dirty motels. You were willing to travel and live thousands of miles from your family.

You are the most charitable person I know. I could go on with the many things you have done for our children and for other friends. You do these kinds of things without any thought that they will be recorded in the books kept in heaven.

A Celebration of Reta’s Life will be held on Monday, October 19, 2020, at 2:00pm. She will be buried in the Millville Utah Cemetery. It is the place where she and Rex spent much of their lives making their house a home.

We would like you to help us honor our vibrant Grandmother Reta by asking you to share a memory or note for us to compile a memory book. Please email your thoughts to her granddaughter Mekenzi Falslev at Mekenzi.anne@gmail.com

Grandma, you served the Lord, your family, friends, and strangers faithfully and selflessly for almost 92 years often without complaint, question, or an intention to receive anything in return. While it is simply impossible to repay you for all you have done, it is one of the highest honors that you chose us. We love you so much. Your legacy will live on forever and continue to inspire and serve. We will see you “Somewhere Over the Rainbow.”