LOGAN – The recent appointment of a new member of the Logan City Council from the west side of town has reignited debate over representation on the municipal panel. 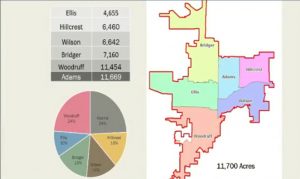 The issue is whether the city’s current system of at-large representation on the city council should be changed to a voter district system.

Ernesto Lopez is scheduled be sworn in as the newest member of the Logan City Council at its next regular meeting on Tuesday evening. At that time, he will be the only member of the five-member panel who resides west of Main Street.

“I was glad to hear that a major aspect of the council’s selection criteria included geographic representation,” Bradfield wrote. “I promised that I would give up my seat to promote diversity and representation. Ironically, the council helped me keep that promise. Please allow such diverse representation to continue in perpetuity by pursuing voter districts.”

At-large representation has been the rule on the Logan City Council since 2009. Despite the fact that nearly two-third of Logan’s population lives west of Main Street in the Bridger, Ellis and Woodruff residential districts, there has never been more than one council member from the city’s west side on the municipal panel in the past 11 years.

Under Logan’s declared seat system used previously from 2002 to 2009, at least two council members always hailed from the west side of town.

Since his election to the city council in 2018, west side resident Bradfield was a vocal advocate for a return to voter district representation.

At a contentious meeting in October 2019, Bradfield urged city council members to adopt an ordinance implementing by-district election of council members. The other council members argued that Bradfield’s proposal was ill-timed so close to a municipal election, but agreed to appoint a city subcommittee to study the issue.

As designated by council chair Anderson, the subcommittee’s charter was to examine the council’s current representation history, make comparisons to peer cities, identify pros and cons of a change in election process, investigate the legality of any election process change and seek consensus and/or minority opinions on the proposed change.

During a city council meeting on Oct. 6, Simmonds reported that members of the subcommittee were now drafting the components of their final report. In response to query, however, Simmonds said she could not estimate when that report would be completed and could not explain the council’s next steps when the report was finally submitted.

Local attorney Herm Olsen, a three-term veteran of the Logan City Council, said the current debate over voter districts is by no means a new one.

“When Jay Monson served with me on the City Council, he championed ‘district’ voting,” Olsen explained. “But I resisted. I had been elected ‘at large’ and thought that I owed as much to the southwest side of town as I might to the northeast on any particular issue.

“My years of working at both the national and state level confirm that … views and thoughts from anyone outside of an official’s immediate electorate were promptly ignored. There is an impunity, like it or not, if I am not accountable to the west side when an east side issue arises. And that impunity elevates to immunity – because I have no accountability to any of those ‘other’ people.

“So I opposed districts back then for those reasons,” Olsen added, “and I oppose districts now. It reduces the responsiveness of council members if they only have to care about their districts.”

But Keegan Garrity, a member of the Voter District Subcommittee, says that at-large representation tends to limit the pool of candidates for any city council seat due the expense of running a citywide campaign.

“We should be asking ourselves if a great candidate like Ernesto Lopez could have won a seat on the council in an at-large campaign?” Garrity asks.

“There were many good candidates,” Bradfield agreed, referring to the field of 15 diverse city residents who applied to fill his former seat on the council. “But the realities of an at-large election would have presented most of them with the challenge of being unknowns and political outsiders in a city-wide campaign. And, if that were not enough, the cost would be overwhelming.”

The issue of diversity also looms large over the voter district debate.

According to most recent available statistics, Hispanics represent about 15 percent of Logan’s 48,000 residents.

Of those estimated 7,200 Hispanic residents, only about 16 percent live in the east side Adams, Hillcrest and Wilson neighborhoods. Yet 80 percent of Logan city council members have come from those neighborhoods since 2009.

“While I am elated with the outcome (of Lopez’ appointment) because it accelerated broader representation,” Garrity emphasizes, “the current system of at-large seats on the city council obviously doesn’t facilitate that kind of representation.”