Cache Valley women who played groundbreaking roles in Utah history honored by the "This is HER Place" podcast include Mae Timbimboo Parry (left) and Alison Comish Thorne (right).

LOGAN – The producers of “This is HER Place” are inviting public input on the content of their second season of the Utah-based podcast. 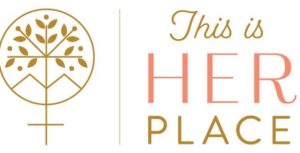 Allison Pond, a member of the podcast’s five-person creative team, made the appeal for content suggestions from the public during a Wednesday celebration of the first season of “This is HER Place” at the Ellen Eccles Theatre in downtown Logan.

During a question and answer session at the conclusion of the event, which proved to be  more informative than entertaining, Pond invited audience members to visit the podcast’s website to make suggestions about groundbreaking women in the past and present.

Each of the five episodes in the first season of “This is HER Place” highlighted two Utah women, one a historical figure and the other a contemporary female, whose lives make Utah uniquely theirs.

During the event Wednesday, Williams quipped that the four Utah-based members of the creative team were all newcomers to podcasting and credited remote editing by veteran sound engineer Dorothy Abrahams with making the first season of “This is HER Place” possible.

The podcast is supported by funding from private donors and USU’s “Year of the Woman” initiative, which commemorates the 100th anniversary of women’s suffrage in America.

The celebration of the “This is HER Place” podcast on Wednesday was an unusual multi-media event that provided a behind-the-scenes look at the podcast’s motivation and creative process.

The “This is HER Place” celebration attempted to recapture the excitement of creating the podcast through stories and audio bites with the Utah-based creative team appearing live and Abrahams streaming in her recollections.

That creative process included researching and honoring some Cache Valley women during the first season episodes of the podcasts.

One of those groundbreaking women was Mae Timbimboo Parry, the grandmother of Democratic congressional candidate Darren Parry of Providence.

Mae Timbimboo Parry was a matriarch of the Northwestern Band of the Shoshone Nation and a historian of tribal oral traditions. She successfully lobbied the National Park Service to correct its historical references to a Cache Valley tragedy that occurred on Jan. 29, 1863. Largely thanks to her efforts, that event is now acknowledged as “The Bear River Massacre” in recognition of the near annihilation of her tribe by attacking U.S. cavalry troopers.

Mason praised Mae Timbimboo Parry as a woman who was determined to make sure that future generations would know the true story of her people.

“History is how our stories are remembered,” the USU historian emphasized. “From that perspective, Mae Timbimboo Parry literally changed history. She couldn’t change the tragedy itself, but she did change the way that event is remembered.”

Another Cache Valley woman highlighted during the first season of “This is HER Place” was Alison Comish Thorne, a USU professor who was viewed by many as a radical figure during the 1970s for her opposition to the Vietnam War and her advocacy of the Equal Rights Amendment.

But Mason praised Thorne as a woman who had an “almost uncanny ability to create bridges with people who thought and felt differently than she did.”

In the finale of the first season celebration on Wednesday, Mason announced that a new round of donations had been received that will enable a second season of “This is HER Place” to be produced and he encouraged the public to make suggestions for upcoming episodes of the podcast via the website at https://www.thisisherplace.org.