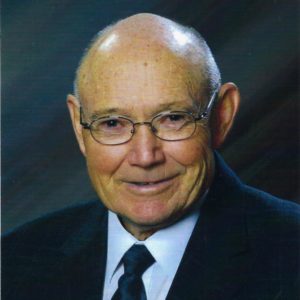 Bryce D. White, 88, passed away peacefully at his home in Smithfield, Utah on November 18, 2020 due to complications associated with cancer.

Bryce was born June 17, 1932 to Alden D. and Lois Venita (Nita) White in Rock Springs, Wyoming.  He was the fourth of nine children and the oldest son.  He and his siblings grew up working hard on the ranch, first in McKinnon, Wyoming, then in Ballard, Utah.

At the age of 18, Bryce committed to serve as a full-time missionary for The Church of Jesus Christ of Latter-Day Saints.  When he turned 19, he was called to serve in the Western Central States mission, where he served faithfully for two years. His siblings described this decision and action as a defining event in Bryce’s life.  His faith in Jesus Christ as our Savior and devotion to Christ’s church continued to be an anchor and central focus throughout his life.

Bryce returned home after his time in the mission field and went to Brigham Young University where he met, courted and later married Joanne Ruth Partington in the Salt Lake temple on July 1, 1955.  Bryce and Joanne started their family in California, where they welcomed four children, Greg, Becky, Brad, and Dug.

Bryce supported their family in California first as a barber, and then as a fireman.  Bryce enjoyed serving others and loved to offer and give haircuts to friends, family, missionaries and acquaintances.  He continued barbering for the next 50 years as one of his consistent ways of serving and lifting others.

In 1968, the family moved to Providence, Utah.  Bryce and Joanne welcomed two more boys into the family, Nathan and Dan.

Two defining tests for Bryce were his tragic helicopter accident that left him in constant pain and the early death of their son Dug. With the love of Joanne and his family, those tests strengthened and humbled Bryce, and solidified his commitment to persevere. He never stopped working physically and spiritually even when relaxing with family. He was a tireless friend. He would never fail to keep a commitment or to give any service he saw possible. He was a ruthless card player and king of corny “dad” jokes.

Bryce and Joanne served two full-time missions in Australia and consistently spent their time and efforts loving and serving others, particularly their family.  In early 2020, Bryce was diagnosed with stage 4 cancer.  The cancer brought increased physical pain, but over the 40 previous years, he had trained himself to not complain or even let on that he was in discomfort.  He remained cheerful and uplifting to the end. Joanne was a constant source of comfort and strength to Dad in this final trial, just as she had been since they met at BYU 65 years ago.

Bryce was welcomed to the other side of the veil by his parents, parents-in-law, four of his siblings, his daughter-in-law, Teri, and his son, Dug.

The services will be broadcast via Zoom – contact Nathan at nathanwhite435@gmail.com for connection details if you would like to join.

The family wishes to give a sincere thanks to the hospice nurses and doctors who cared for him during his last few months with such dignity and personal care.