Darren Parry, the former tribal chairman on the northwestern band of the Shoshone Nation, visits the site of the 1863 Bear River Massacre outside Preston (Photo courtesy of KUER).

PRESTON – This year’s commemoration of the 1863 Bear River Massacre on Friday will be a private event, according to Shoshone tribal spokesperson Darren Parry of Providence.

“We’re not having a public commemoration this year at the massacre site,” Parry announced at a book-signing event in Hyrum on Jan. 9. “It will be the first time in a long time that we haven’t done that, but we wanted to do the right thing in the midst of the coronavirus pandemic.

“We’re still going to do a full commemorative program there, but we’re not inviting the general public to avoid spreading COVID-19.”

This year will mark the 158th anniversary of the Bear River Massacre. That tragedy took place in what is present-day Franklin County on Jan. 29, 1863, when a cavalry detachment of California Volunteers attacked a Shoshone encampment gathered where Bear River and Battle Creek meet near the current site of the city of Preston. Hundreds of Shoshone men, women and children were killed in that largely one-sided engagement.

“Brigham Young University has offered to come up on Jan. 29 and film our private commemoration ceremony professionally,” Parry added. “They plan to take one day to edit their video and then make it available to the general public on TV.”

After decades of being inaccurately recorded as the Battle of Bear River, political activism by descendants of Shoshone survivors of the massacre resulted in the little-known event now being recognized as possibly the deadliest slaughter of Native Americans on the U.S. frontier.

The site of the Bear River Massacre was designated as a National Historic Landmark in 1990. The Northwestern Band of the Shoshone Nation acquired the site in 2008 with the intent of raising a cultural center there to honor the enduring spirit of the Shoshone people. 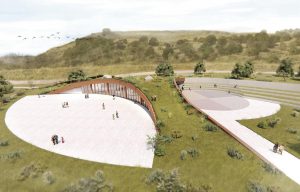 Parry said that the planned Boa Ogai (which is Shoshone for “Big River”) Cultural Center will not be merely a museum, but also an interpretive facility that will teach visitors about Shoshone culture.

“We are still raising money for improvements to the massacre site,” Parry admitted. “I raised about $3.5 million in the first 18 months of that campaign. Then the COVID-19 pandemic hit last year and I’ve only raised about $50,000 since then.

“We’re grateful for that amount, of course. But we still need another $2 million and I’m really hopeful that I’ll have that accomplished by this summer.”

In the meantime, Parry said that the Northwestern Band of the Shoshone Nation will break ground in the spring for a 500-person amphitheater on a hillside above the massacre site.

“It’s a really beautiful spot and we’ve already got enough money to begin that construction,” he explained. “The tribal council decided to do that, in case I don’t raise enough money for the rest of the project, so that we’d still have a place to hold events at the site.

“I guess that shows the kind of faith they have in me,” Parry laughed.

In addition to the construction of the Boa Ogai Cultural Interpretive Center, leaders of the Northwestern Band of the Shoshone Nation also plan to redevelop the area around the Bear River Massacre site to return its vegetation back to the natural habitat in which the Shoshone people lived.