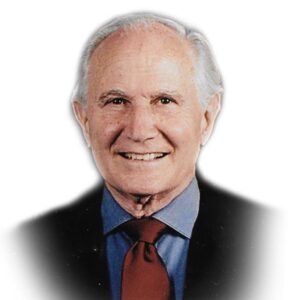 Dr. Frederic Wagner was born in Corpus Christi, Texas. By high school, Fred had attended 13 schools in four states. After high school, he tried the life of a cowboy, thinking he would like to be a rancher.

Instead, he attended Southern Methodist University, where a cute young lady, Marilyn Christensen, captured his attention. He arranged to enroll in the same anatomy class that she signed up for, and ultimately, she became his wife, and love of his life (Marilyn passed away in 2018).

They moved to Madison, Wisconsin so Fred could attend graduate school at the University of Wisconsin. In Madison, sons Gregory and Jeffrey were born. Fred earned his Ph.D., becoming an ecologist before the term was widely known. He then accepted a faculty position at Utah State University, and later also served as Associate Dean of the College of Natural Resources.

Fred and Marilyn traveled the world. Fred had high moral standards, loved life, and loved learning and knowledge. He had wonderful friends and neighbors for which he was, and his sons are, eternally grateful. His sons are also very grateful to ComForCare, Pat. S., and to the wonderful, caring staff of Sunshine Hospice and Sunshine Terrace.

Due to COVID, a memorial will be held at a later date.