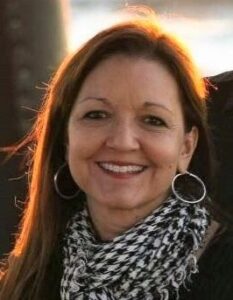 On Monday, April 12, 2021, Vivian Marie McCune Love, loving wife, mother of three children, grandmother of eight, passed away at the age of 60.

Vivian was born in Salt Lake City, Utah on May 6, 1960 to Conwell Clayton McCune and Maria Torres McCune. She was the second child, joining her older sister Victoria “Vickie”. Four other siblings would later join: Vanette, Valerie, Matthew and Mark. As a young child Vivian lived in Utah, Pennsylvania, and New Mexico before her family moved to Yorba Linda, California.

Vivian attended Rose Drive Elementary School, Yorba Linda Middle School, and Troy High School. She met friends in school that she cherished forever. She excelled in journalism and loved drill team. She attended Fullerton College where she was a cheerleader. She then transferred to Brigham Young University in Provo, Utah. She spoke fondly of these times of friends, dating, playing tennis, skiing, and occasionally going to classes.

Vivian was called to serve a mission for the Church of Jesus Christ of Latter-day Saints to Seville Spain in 1981. Vivian reported to the Provo, Utah Missionary Training Center where she met a handsome young man, Will Love, who was called to serve in Peru. Vivian served in Spain for eighteen months. She loved the people, culture, food, and had many adventures in the Andalucía region. While on her mission, she was a faithful pen-pal to her siblings, friends, and her friend Will.

When Vivian returned home to Provo Utah to continue school at BYU, she reunited with Will, who had also recently returned home from his mission. They dated for three weeks before Will proposed. A few months later the two were married in the Salt Lake City, Utah LDS Temple on April 15, 1983. The two resided in the Salt Lake area in 1984 when they welcomed their first daughter, Julie.

After one long cold winter, Vivian insisted the family move to Yorba Linda, California: The Land of Gracious Living. In 1987 they welcomed their second daughter, Stacy. Will and Vivian bought their first home in Corona, California in 1990. They welcomed their son, William Todd, in 1990. Vivian had dear friends in Corona that inspired her to become a fantastic quilter and homemaker. During these years, Vivian took care of her sister Vanette during her fight with skin cancer. Vivian expressed that this time in her life was one of the most rewarding to be her sister’s care giver.

In 1995, the Love family moved to Yorba Linda, California, in the same house that Vivian had grown up in. Vivian thrived as a dedicated fan to all of her children’s sports and activities. She was engaged in her community and church callings, which included serving with the youth and her most cherished calling as a seminary teacher. Vivian also excelled as a long-arm machine quilter. She volunteered as a docent with the Richard Nixon Library and Birthplace.

In 2009, Vivian became a grandmother for the first time. Vivian’s focus became her grandchildren. She spoiled them with gifts, visited often, and create individual relationships with each of them. In 2012, Vivian moved to Placentia, California and became involved with multiple charities. Her favorite was the Gary Sinise Foundation. Vivian also served in various capacities with her church including served at the Newport Beach LDS Temple, Family History Library, and the California Anaheim Mission.

Vivian also maintained an active social media presence under the name “Regards Mrs. Love.” Mrs. Love would post trivia about celebrities and give happy birthday wishes almost daily. She would also use her other accounts to share stories of her ancestors and her genealogy work. A proud accomplishment was establishing the successful Facebook page “Sweet Home Yorba Linda” that reunited old friends and memories online. Social media became a place for her to build new relationships, gain devoted fans, share her love, positivity, and humor. She was blessed with the gift of words, writing, and storytelling.

Vivian was began having significant health struggles in March 2020, ultimately being diagnosed with multiple myeloma cancer that year. She was a warrior as she had an aggressive fight and stayed optimistic throughout. While she struggled, she would continue to post messages online of things that brought her joy and made her laugh. She enjoyed sharing her stories and sharing her love for her family.

Masks are required and please plan to social distance in compliance with local COVID-19 regulations.

In lieu of flowers, the family asks that donations be made to the Gary Sinise Foundation in honor of Vivian Love or the National Multiple Scoliosis Society, causes that were both near and dear to her heart.

The funeral service will be live streamed and may be found at www.ruddfuneralhome.com under her obituary.