The Cache Valley Visitors Bureau has announced that it will contribute $150,000 in tourism tax funds to the Center Block Plaza project in downtown Logan.

LOGAN – Mayor Holly Daines and Logan City officials are hoping to provide local residents with a $4.3 million gift just in time for Christmas in 2022.

That holiday gift will be the projected opening of the much-anticipated Center Block Plaza in downtown Logan.

“The plaza’s location will unify the wonderful aspects of historic downtown and open up the Center Block,” Daines explains. “That will create a gathering place and promote walkability downtown.

“The plaza will build upon recent improvements to Center Street and effectively link the beautiful Ellen Eccles Theatre on the south with the historic County Courthouse on 200 North and the city’s future library on 300 North.” 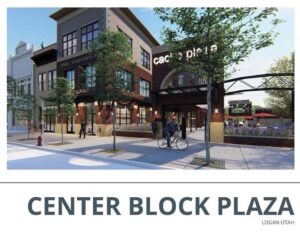 The idea for a public plaza to replace the now-vacant Emporium Building on Main Street began as a suggestion from the public during a visioning meeting in summer of 2018.

An initial city proposal for the project that included residential housing within the Center Block was hotly opposed by some members of the business community.

But city officials persevered to develop alternative plans that eventually found favor with the Logan City Council, the Historic Preservation Committee and the City Planning Commission.

With those administrative hurdles past, demolition of the Emporium and adjacent structures is now expected during the upcoming winter months. Construction of the public plaza is set to begin in spring of 2022 with completion by the end of the year.

“The project will take the former Emporium site from vacant to vibrant,” Daines promises. “The plaza will be programmed with activities to draw citizens and visitor year-round.

“The outdoor stage will feature a wide variety of free entertainment. A splash pad/water feature will provide summer fun wanting to get wet or simply choosing to sip a soda under the shade canopies while enjoying the activity.

“During the winter, visitors can enjoy the ice-skating rink or gather around fire pits while watching the plaza lights and views of the historic Tabernacle.”

The city’s redevelopment agency has invested more than $4.3 million in the plaza project, including about $1.3 million for the demolition of the Emporium and adjacent structures to the north; about $2.1 million for construction of the public plaza; around $400,000 for the portable ice rink; and about $440,000 for construction of an outdoor stage and an administration building.

City officials also requested another redevelopment grant in the amount of nearly $1.6 million for the remodeling of structures adjacent to the proposal plaza to the south at 41 and 45 North Main Street.

Daines explains that the city plans to sell the 25,000 square-foot Plaza 45 complex, hoping to attract restaurants or other operations that will increase the Center Block Plaza’s benefits to the public.

Proceeds from the sale of the buildings at 41 and 45 North Main are expected to help offset the construction cost of the Center Block Plaza.

The Power of Public Plazas.