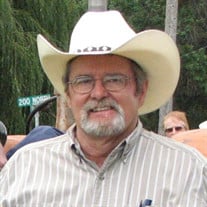 Robert came into this world Oct 16, 1955 in Logan, Utah. He was born of goodly parents Velda Hodges and James Brigham Spackman. He was brought home to the farm in Trenton, eighth of nine children. He passed from this life on May 16, 2021 at the same home, with his sons and wife at his side.

Robert was educated at the Trenton Elementary school where he had good memories of special teachers and friends. He lived close enough to the building that he was able to go home for lunch each day. He continued at North Cache in Richmond, and graduated Sky View High School in 1973.

Robert remembered working hard as a young boy, hoeing beets and doing many chores on the family farm. He worked with uncles and cousins. He did not travel much, and the work in the fields taught him the value of responsibility. He branched out some during high school when he went to milk cows for Bob Munk. Both Bobs were good friends during their lives. They had some good visits, especially as they got a little older and more seasoned.  Robert then went on to drive cement truck for Parsons, and earned a good wage. Then he bought his first new pickup. He was proud of that accomplishment. He also drove for a trucking company and hauled livestock and other materials throughout the midwest.

His father passed away in 1978, and it was Robert’s decision to take care of the farm full time and make it a career. He was serious about that undertaking and was able to make many improvements and changes as he worked his ground and managed a herd of 60 dairy cows. He received a few awards for his his cows’ low somatic cell count and overall good health. Those animals were well fed and cared for.
He married Linda Taylor on September 29, 1978. They became parents of four fine sons and went on to teach them the value of hard work. All the boys could tend a sick calf or run a tractor from a fairly young age. Robert and Linda continued to the work the farm and cows for the next 20 years. It was a process to manage a young family and keep a fair balance. They did not vacation or play much. They managed to make the last payment on the farm after 20 years of hard work, being free of debt for a long time.  Robert’s health began a decline about then. Doctors treated him for asthma, but that was discovered as not being the problem. A good Rhumatologist diagnosed him with an autoimmune disease called Scleroderma. This targeted his lungs and made breathing difficult. He had a rasping cough through the remainder of his life.  He was recommended for a lung transplant, and after all the paperwork, went to Washington state to await treatment. He eventually lived with his sister Elaine at her home in Bellevue as the time passed. She was generous to offer her basement as he needed to be nearby the hospital when the opportunity came up. He waited for more than 15 months, because of a rare blood type. He was able to received his needed lung from a generous family who had lost their young son due to a logging accident. His healthy body saved several lives nearby, due to the transplant program.

Robert was able to come back to Trenton and make a go of some semi-retirement years. He worked part time for Cleve Buttars at Agri Service as a salesman and general go-fer. He made many lasting friendships there, the business changed hands and was renamed Cache Equipment. The management of that business was very patient with him as he spent many days hospitalized.  Doctors originally thought Robert would have about 10 good years post-transplant. That was 21 years ago on Sept 1. He was the last surviving member of the support group of about 20 he belonged to in the Seattle area. He was able to see two sons serve missions for the Church of Jesus Christ of Latter Day Saints, all four marry and become fathers themselves. His boys were a source of pride for him.

Robert’s knowledge of tractors and farm equipment was vast. He could see a photo or pass a vintage tractor in the field and tell you what year it was, how many horsepower and likely where it was built. This gave him a good background in his position at Cache Equipment.
He joined an Antique Machinery club and was right at home. The other members became good friends almost instantly, they had a lot in common. You have maybe seen them in parades and displays at the county fairs. It was a great association for all, and an opportunity to share memories and knowledge with each other. Of course, Robert had to have nice tractor to take along. He hand restored 4, and when he was finished, they looked like they had just rolled off the assembly line. He paid good attention to detail with those tractors. He especially loved a John Deere.

Robert, being a true farmer, loved to garden. He grew a nice vegetable patch and really enjoyed watching it flourish. He had a good crop of potatoes and tomatoes each year which he shared with neighbors.  He also enjoyed the occasional visits at the Newton store. Those guys solved a lot of life’s problems as they chatted over a Diet Coke.

Robert’s health took a decline about two years ago. He had a lot of infections in the old lung and had many antibiotic infusions. One could well imagine the medication that went into his body. He managed as well as he could, having many hospital stays. He was admitted 6 times since Christmas and the last time, he came home having been told there was really nothing more they could do for him. He had exhausted any antibiotic that was effective and he knew his time was short. Jordan came from Ohio about 6 weeks ago, just for a visit. Robert was well enough to take a few rides and they had a chance for some good talks. He came home and rested, spending most of his time at the house, able to do little.

Mother’s Day was really about his last lucid day. He came to the table for lunch and spent the afternoon napping. The decline was quick after that. Home health care staff visited each day, giving us encouragement and direction. We knew exactly what to expect, but that did not make it easy. Robert’s system began to shut down, his kidneys were exhausted and he had poor heart function, not to mention his lack of breathing ability. Nurses Robert and Holly were exceptional as they helped us through this difficult transition. He was able to breathe his last on Sunday, May 16, 2021. Jesse and Tyson were both there, giving the care to him that no one else could. Adam had spent the previous day at his side, and dosed medicine as needed. Those sons were fine nurses at their dad’s final hours. They were at his side right to the end.

Robert is survived by his wife Linda of Trenton, Jordan and Dannielle of Montpelier Ohio, Adam and Kara of Nibley, Jesse and Kylie of Smithfield, and Tyson and Samantha of Smithfield, seven beautiful grandchildren; Natalie, Grant, Owen, Ethan, Zane, Evan and Ivy. Siblings include Kathryn and Wade (dec) Fullmer, Darwin and Geri, Wendell and Loretta (both dec) Janet and Lynn Buttars, Dale and Jolene, Marva Bruneau, Elaine Riggs, Bert and Janet, along with many nieces and nephews.

He will be laid to rest at Trenton Cemetery.

Special thanks offered to many medical staff through the years. Their dedicated service helped extend his life. University of Utah Transplant team was good to offer their expertise and care. Not to mention the pharmacists and staff responsible for his medications. They were well rounded experts who did a phenomenal job.