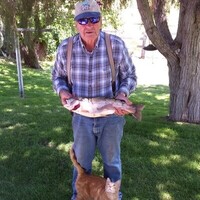 Duval “Lynn” Lish, 89, a lifelong native of Marsh Valley, left his earthly home Thursday, May 20th, 2021, with his loving wife and children by his side. He was born on April 1st, 1932, an April Fool’s baby, to Jack and Estella Lish in Pocatello, Idaho.

His young life was spent in Onyx, Idah; moving to Pocatello for his early school years. He later moved back to Onyx as a teenager to work on the farm of his Uncle Don and Aunt Mabel, where he completed school, graduating from McCammon High School in 1950.

He was drafted into the Army at 19 years of age and served 15 months in the Korean War. Upon his return, he met and married Patricia Lee Guinn. They began their married lives in Pocatello, moving to Marsh Creek in 1965, where they have made their home for the last 56 years. Together, on a small acreage, they raised five children; Linda Burrup, Alan (Brenda), Vicki (Richard) Wilde, Rod, and Lori (Brad) Kent. He is a great father and is adored by his children.

He worked for the Union Pacific Railroad as a car shop foreman. His crew described him as “no greater boss, no greater man,”retiring after 43 years in 1994. He also trained to be a master electrician, which he worked at as well for 18 years. Many precious memories were made with his family and his passions for hunting, fishing, riding his “old Appy horse,” and roaming the hillsides with his best friend, Chief. He later spent many hours on “the river” in the river boat which he built.

He was preceded in death by his son Bobby, his mother Estella, father Jack, his sisters Vonda and Freda, and his brother, Willy.

Burial will follow in the Norton Cemetery, McCammon, Idaho. Military Rites will be accorded at the Cemetery.