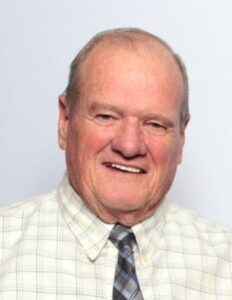 Nelson “Blaine” Lott, 81, of Thatcher, Utah passed away in the early morning hours of Saturday, May 22, 2021 with his sweetheart Peggy by his side. He had been diagnosed with acute myeloid leukemia a short 11 weeks earlier.

Blaine was born on October 1, 1939 to Calvin Moore and Leora May Nelsen Lott in Thatcher. He was born at home and would go on to live in this same house almost his entire life. It was only fitting he would pass from this life in that same home.

He graduated from Bear River High School in 1957 where he was a first chair baritone player in the band. It was there he met his first love, the beautiful Sherlene Bowcutt. They met during a night of tomato throwing, which eventually led to a short visit to the police station. Fortunately, no citations were issued but love blossomed.

On February 19, 1958 Blaine and Sherlene were married in Tremonton, Utah. They were sealed for time and eternity in the Logan L.D.S. Temple on June 4, 1965. Their love and devotion to one another was a beautiful example to their family and many others around them.

A new company in the valley, Thiokol, had recently opened in 1958 and Blaine was hired on as one of the original employees, badge #692. He would go on to retire from this same company 43 years later. He was highly respected by many of his co-workers for his incredible work ethic.

Gardening was a passion for him. When he was younger and had six children at home, he had 2 acres of land that was planted with vegetables and fruit trees. He used this as an opportunity to instill in his kids the importance of hard work and not quitting until the job was well done. Blaine was a perfectionist when it came to the garden. He loved to share his bounteous harvests with others. They would often go out on Saturday nights to pick produce so that on Sundays the neighbors could stop by his place, on their way home from church to pick up some vegetables for their dinners. Even last summer he planted 36 tomato plants, all for the sake of sharing. When he would go camping, he would take several 5 gallon buckets, filled, so he could give them away to other people, whether he knew them or not.

Nothing brought more happiness to Blaine than spending time with his family, especially in the mountains. They loved to hunt, fish, camp and ride ATV’s. So many memories were made at Clear Creek, Devil’s Creek, Elk Valley and Logan Canyon. Vacations were often planned around where they wanted to go scout animals for the next hunt. He was a skilled and successful hunter. For many years, very little meat in his home was store bought. His hunting tales have long been the mainstay around the campfires.

BYU blue cougar blood coursed through his veins. He rarely missed a basketball or football game. He and Sherlene planned many of their anniversary weekend getaways to include a BYU basketball game.

As a faithful member of the Church of Jesus Christ of Latter-day Saints, Blaine served in many capacities. The most recent was as an officiator in the Brigham City Temple. He served for many years as the scout master of the Thatcher-Penrose Ward. He enjoyed working with the scouts and taking them on camping trips to the Uintas. He also enjoyed singing in the ward choir.

Blaine’s heart was broken when Sherlene passed away on July 11, 2011 after 53 years of marriage. He lovingly and tenderly took care of her as she battled liver disease for over 10 years. He was continually learning so that he could take care of her and meet her every need, allowing her to spend most of her time in her home she loved.

Eventually joy came back into Blaine’s life when his brother and sister-in-law tricked him into meeting Peggy Hawkes after a few failed attempts to line them up. He thought he was going to lunch with his siblings and Peggy was led to believe she was going to lunch with a group of friends. Neither Blaine nor Peggy ever thought they would re-marry after losing their spouses but they soon discovered how much they loved and needed one another. They were married May 11, 2013. They enjoyed eight wonderful years together.

Interment will be in the Bothwell Valley View Cemetery.

The services will be live streamed and may be viewed at ruddfuneralhome.com under his obituary.

Online condolences may be shared with the family at ruddfuneralhome.com.