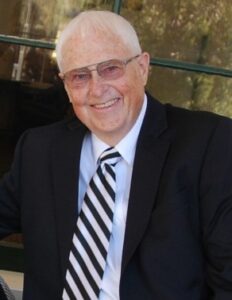 Robert Carlyle Johnson was born on June 16, 1937, to Carlyle Johnson and Alta May Marble in Brigham City, Utah. At age 10, he moved with his parents and brother Ronald from Fielding to Tremonton, Utah. He attended Fielding Elementary, McKinley Elementary, and graduated from Bear River High in 1955.

After high school, he attended Utah State University. While at Utah State, he worked two summers for the U.S. Forest Fire Service in McCall, Idaho, then on construction of the Hells Canyon Dam project. He joined the army in 1959, and after training at Fort Benning, was stationed in Bamberg, Germany, with the United States Army Third Infantry Division.

In 1963, he moved to Los Angeles, California, and worked for Western Wire and Cable in sales for that company. On June 29, 1965, he married Ruth Dolores Swan, a daughter of Robert Swan and Dolores Zuella Beezer. Shortly after their marriage Bob went to work for ITT Royal, a wire and cable company with a sales office and warehouse based in San Francisco and they moved to Sacramento, California in December 1965. In 1970, they moved to El Dorado Hills, California. In 1971, Bob became owner-president of H & J Electrical Sales representing ITT Royal and Alcan Aluminum with offices in San Francisco, but not liking the city, in 1977, they built a home on five acres in Cameron Estates, Shingle Springs, California, east of Sacramento in the foothills of the Sierra Nevada where they remained.

Bob enjoyed golf and was a member of the Cameron Park Country Club from 1976, until his death in Elko, Nevada on May 27, 2021. During their life together Bob and Ruth also enjoyed travel across America and making numerous trips to Europe, Hawaii, Alaska, Mexico, Canada, Costa Rica.

Bob and Ruth are the parents Dr. Robert Swan Johnson of Sacramento, CA and Rachel Dolores Nelson, married to Maurice Kim Nelson of Shingle Springs, CA. They are the proud grandparents of Shaine Alexander Johnson, currently residing in Las Cruces, New Mexico where his wife Prabhjot attends medical school. Bob was preceded in death by his parents, and his brother Ronald.

Bob was a wonderful, smart, hardworking and funny husband, father, and grandfather. He will be missed terribly and loved so very much.