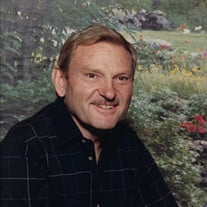 David Arlo Black passed away peacefully on June 20, 2021 at Birch Creek Assisted Living in Smithfield, Utah. He was born in Deseret, Utah on November 10, 1932 to Reuben Lavon Black and Juanita Palmer and brother to Betty Kelly, William Black and Ila Tippetts

He was married to Alice Naelda Snowball for 56 years and for eternity in the Los Angeles Temple June 7, 1958.  David received his Bachelors and Masters (1967) from Utah State University.  He entered service at the beginning of the Korean War. He served honorably in the Air Force from 1950-1967 as an officer (Captain) and pilot. He loved hunting, fishing and the great outdoors and chose a subsequent career in the US Forest Service from 1967-1985.

He was a lifelong, active member of The Church of Jesus Christ of Latter-day Saints. David served as a member of the Branch Presidency in Grand Prairie, Alberta. He served a temple mission with his beloved wife, Alice in 2003-2004 in the Santiago Chili Temple. They served a cannery mission and worked at the Logan Temple together for many years.

He is survived by his wife, Joanie Schenk and his children D. Craig Black, Warren S. Black, Phillip W. Black and Dalynn A. Benson, his brother William D. Black, 12 grandkids and 9 great-grandchildren.

He was preceded in death by his parents, his spouse, Alice N. Snowball and sisters Betty Kelly and Ila Tippetts.

Funeral services will be held at 1:00 PM at the Cobblestone 1st Ward at 420 West 100 North in Providence and there will be a viewing from 6-8 PM that evening at Cache Valley Mortuary at 80 West 4200 North, Hyde Park, Utah.

Interment will be at the Logan City Cemetery with full military honors.