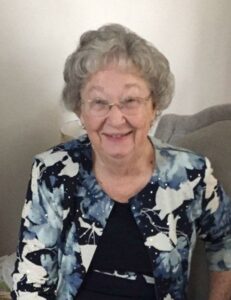 Kathryn “Kit” Vance Dimick beloved mother, grandmother, great-grandmother, sister, aunt and friend passed away on Sunday, June 20, 2021. Kathryn was born December 11, 1933 in Alpine, Utah to Van Alma and Mary Alice Forbes Vance. Kathryn played in the band in American Fork High School where she graduated in 1952. She played percussion instruments in the band. She was proud to be a graduate of the class of 52. She put herself through LDS Business College where she graduated as a Legal Executive Secretary.

She married Kirk Pete Dimick in the Salt Lake Temple in 1954. They were blessed with five children, Kevin, Kenny, Kathy, Kimball and Karyn.

Kathryn worked for Ogden City Schools for many years and made many wonderful friends. After retiring she was voted in as the president of the school board. One of her contributions was to write the grant for the Aerospace School and then as the School Board President see it built and help dedicate it. Kathryn was an advocate for reading and she would read with her children, grandchildren and great-grandchildren.

Kathryn was a talented and accomplished musician. She played the piano beautifully and was called Kitten on the Keys by many family members. She played the organ in the old tabernacle at the age of 16. She brought music into the lives of her children and the home was filled with music.

Kathryn gave of her talent and herself freely and lovingly. She served in the Primary, Young Womens and Relief Society. Her faith in her Heavenly Father was strong and true. Kathryn anonymously helped others in diverse ways. Kathryn served in her local and regional level of the Daughters of Utah Pioneers. She served an Ogden Temple Mission with Kirk and continued that service for years after his passing.

A courageous life well lived. Her spirit was well received.

The family would like to thank the health care providers from Hematology/Oncology of South Ogden and all the medical helpers that cared for Kathryn. For your kindness-thank you.