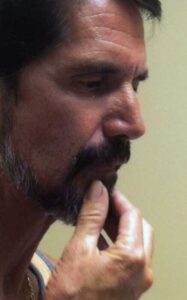 Jeffrey Stan Williams, transitioned peacefully in his home in the arms of his loving family on June 26, 2021.

Jeff was born on November 29, 1965, in Box Elder County to Stan and Carol Williams. He attended Lake View Elementary and was on the little league football team and won the mini bowl that year. He graduated in 1984 from Box Elder High School and later took a job in Hawaii where he lived and worked for four years. He loved Hawaii and his time spent on the beach there. Upon his return from Hawaii he became a machinist and he loved it.

He married Taika Dawn Taylor in Box Elder County May 8, 1998, and they made their home in Brigham City, Utah.

Jeff was an excellent Machinist. He loved his family very much and always took care of everyone around him. He loved fishing, playing with his German Shepherds, flying his gigantic kites, going to demolition derbies with his son Bradyn, cruising in his 1977 Volkswagen Super Beetle and listening to Classic Rock. He loved working on his cars, spending time with his family, and going to the bay.

Jeffrey had an energy that people were just naturally drawn to, he was kind to everyone. He is loved very much by his family and friends and he will be deeply missed.

The family would like to give a special thanks to Dr. Markeson and the Bristol Hospice Team.

He was preceded in death by his grandparents: Ralph and Martha Williams and John and Bea Burden.

Online condolences may be expressed at www.myers-mortuary.com