LOGAN – The annual Vosco Call Spotlight Concert has become the equivalent of a family reunion for past and present Lyric Repertory Company performers and their friends. 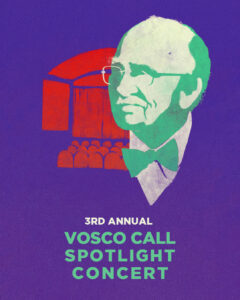 That ad hoc family displayed a remarkable depth of talent Tuesday in a mixture of live and digitally recorded performances.

While the concert’s vocalists ran the gamut from Broadway veterans to Utah State University students, their performances were all superb.

The familiar face of Eric Storey opened the concert with a amusing rendition of “Everybody Says Don’t” from the early Stephen Sondheim musical “Anyone Can Whistle.” Storey was last seen locally in the Lyric production of “Murder for Two” in 2019.

From the Broadway cast of “Mean Girls,” young Cailen Fu delivered “Stupid with Love” from that show’s score. Ms. Fu performed in the 2019 Lyric staging of “Mama Mia!”

Performing live, USU student AJ Black sang “I Chose Right” from the musical “Baby.” Black can be seen in the current Lyric productions of “The Thanksgiving Play” and “All the Way.”

In a departure from the concert’s string of show tunes, Matt Mueller performed a moody version of “Make You Feel My Love” by Bob Dylan. Mueller is an Actors Equity Association performer last seen here in the 2018 Lyric productions of “Peter and the Starcatcher” and “Sense & Sensibility.”

Several other professional performers sent amazing vocal tributes to Vosco Call via digital recordings. They included Belen Moyano, performing “Putting It Together” from “Sunday in the Park with George;” Andrew Samonsky singing “Younger Then Springtime” from “South Pacific;” Melinda Pfundstein, with a lovely rendition of “Not While I’m Around” from “Sweeney Todd;” and Jenn Colella, who delivered a show-stopping version of “Don’t Rain on My Parade” from “Funny Girl.”

But the real surprise of the evening was recent USU graduate Cat Evangelho, who blew the doors off the Morgan Theatre with a powerful live rendition of “Blue Horizon” from “Out of Our Heads.” Ms. Evangelho is now appearing in the Lyric productions of “American Dreaming” and “The Thanksgiving Play.”

In addition to honoring the memory of the late founder of the Lyric Repertory Company, the 3rd Annual Vosco Call Spotlight Concert also served as fund-raiser for the theater troupe.

A native of Cache Valley, W. Vosco Call was already an accomplished stage actor when he joined the faculty at Utah State University decades ago. He was one of the founding members of the university’s modern theatre arts program, where he helped to mold multiple generations of future performers.

Vosco Call also played an instrumental role in the acquisition and restoration of the Caine Lyric Theater in downtown Logan and founded the Lyric Repertory Company in 1967.

Vosco Call died in December 2019 at the age of 91. His grandson, Richie Call, is now the artistic director of the Lyric Repertory Company.

Richie Call says that fans of the theater program can make donations by accessing the Lyric Repertory Company’s webpage at lyricrep.org.