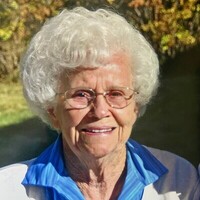 Mary Thelma Daniels Wakley, 98, passed away peacefully at home on June 26, 2021. Thelma was born October 7, 1922, in Malad City, Idaho. A daughter of LeRoy and Mary Daniels, she was the fourth of nine children.

Thelma learned how to be a homemaker from her mother, and how to be a farm girl from her father. They spent many summers on the ranch at the head of Malad. She graduated from Malad High School with a desire to become a Home Economics teacher, although the girls didn’t end up with the opportunity to go to college at the time.

On April 24, 1943, she married her best friend and eternal partner, Howard Wakley, at her parents’ home in Malad. Their marriage was solemnized at the LDS Logan Temple on October 5, 1961.

They spent their first summer of married life on the Big Onion where Howard was a range rider. They then moved to Malad, where they spent the rest of their lives. Both Thelma and Howard were very active in the church, holding a number of different positions. Thelma was on the Primary Stake Board for many years. Thelma and Howard enjoyed gardening and traveling, which they did often with both family and friends.

Thelma loved to spend time with her children, grandchildren, and all her nieces and nephews.

Howard passed away on July 9, 2009, and Thelma lost her companion and the love of her life after sixty-six years of marriage, and a great life together. Thelma is survived by her four children: Gary (Susan) Wakley, Lynda Face, Janice Nelson, and Mark (Bonnie) Wakley, her sister Dean Jones, fifteen grandchildren, twenty-eight great-grandchildren, and more on the way. She was preceded in death by Howard, her parents, and eight siblings.

Funeral services will be July 1, 2021, at the Horsley Funeral Home in Malad, Idaho, at 12:00 noon. Family and friends are invited to visit one hour before the services.

Burial will be at the Malad City Cemetery.