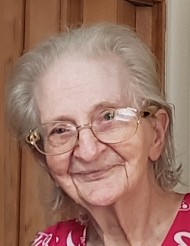 Ruby Ellen Allen Didericksen passed away on July 5, 2021, at age 90, in Smithfield, Utah. She was born on May 29, 1931 in Manti, Utah to Andrew Herold Allen and Mary Anna Barnhurst.

Ruby spent her life being a homemaker and wife.

She loved her twenty-one grandchildren and her thirty-nine great grandchildren. They were all incredibly special to her.

Ruby was a member of The Church of Jesus Christ of Latter-day Saints.

She is preceded in death by her husband Jay, parents, four older sisters, son-in-law Kelly Oyler, and grandson Trever Rawson.

A graveside service will be held on July 8, 2021, at 10am at the Valley View Cemetery, Bothwell, Utah.

Special thanks to the staff at Birch Creek Assisted Living and Atlas Hospice for the special care they provided.