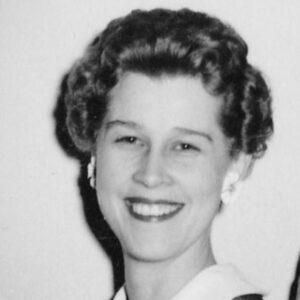 Doris Mae Cooley Benson died peacefully at her home on Sept 13, 2021. She was 87 years old.  Doris was born in Newton, UT on Oct 25, 1933, a surprise daughter born a few moments after her twin brother Norris arrived. Her parents were Walter LeRoy Cooley and Wilma Larsen Cooley. She spent most of her growing up years in Newton, but her family also lived in Richmond and Arizona for a time. She grew up with older brothers and knew more about playing baseball than playing with dolls. She played on a softball team where she was known for her ability to throw the ball from center field to home plate and for being a good hitter. She graduated from North Cache High and worked for a time at Cache Valley Dairy. She attended BYU for a short time and then made the decision to marry.

Doris was married to Glen Royden Benson on March 15, 1954. Glen was serving in the army at that time and was stationed in Japan. Doris was able to join him there and they spent a year enjoying the lifestyle and culture of Japan. When Glen was discharged, they returned to Newton to live and raise their family.

Doris was blessed with a cheerful nature and a positive attitude. She was a hard worker, always doing her part to help Glen on the farm while also managing things at home. She had just the right touch as a wonderful cook, famous for her homemade bread and rolls, cheesy potatoes, and those yummy brownies. She always kept a garden and spent many hours canning fruits and vegetables.

She had a strong spirit and showed great courage in the face of adversity. She was a kind friend, had a gentle nature, possessed great patience, loved children, and laughed often. She made home a place where everyone wanted to be. She served her family selflessly, including caring for her oldest daughter Jolene through two bouts of cancer, the second of which was terminal. She took her aging mother into her home and cared for her until her passing.

She has given many hours of service to her church and community over the years. Nursery children and primary children have loved her as a teacher and the sisters in Relief Society have been blessed by her loving care as she served them. She was a faithful visiting teacher and made many cherished friendships with the sisters that she visited.

She has been a loyal Aggie fan and an avid follower of the Utah Jazz. But she loved even more to support her children and grandchildren in their many activities. She attended every performance, production, sporting event, and graduation that she could. She loved to read and enjoyed learning.

She was preceded in death by her parents, her daughter Jolene, her brothers Max and Norris, 2 grandchildren, and a great grandson.

Funeral services will take place at the Newton Church Friday Sept 17 at 12:30 pm.

Interment will be at the Newton Cemetery.