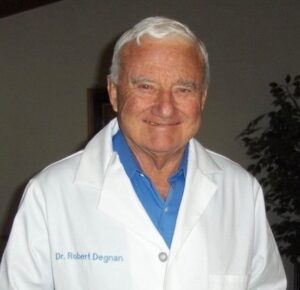 Born to Dwight Alexander Degnan and Harriet Mabel Degnan (nee Lenahan) on May 16, 1932, in Los Angeles, California, Dr. Degnan was raised in Pasadena, California. After completing his early education, Dr. Degnan studied horticulture at the University of California, Davis, before he discovered a passion for medical sciences. He completed his pre-medical undergraduate degree at Occidental College in Los Angeles in 1954 before attending the University of California Los Angeles Medical School. Dr. Degnan received his medical degree from UCLA in 1958.

Dr. Degnan spent a brief year following medical school working as an OB-GYN and surgeon at Strong Memorial, a teaching hospital in Rochester, New York, before he was drafted into the Air Force. Dr. Degnan served as a flight surgeon at Wheelus Air Base in Tripoli, Libya from 1959-1961. Upon his return, Dr. Degnan undertook his medical residency at New York Hospital in New York City, where he met Marjorie Oberheim. They married on August 23, 1962.

In 1964, the pair moved to Hacienda Heights, California, where Dr. Degnan worked as an OB-GYN until 1975, when he moved his practice to Rock Springs, Wyoming. Dr. Degnan remained in Rock Springs until 1985, when he took an OB-GYN position in Soda Springs, Idaho, and moved with Marjorie and their youngest children to Montpelier, Idaho. During these years, Dr. Degnan and Marjorie had eight children together.

Dr. Degnan was a highly qualified surgeon and sought after OB-GYN, and he maintained a full life outside of the hospital, as well. Dr. Degnan never gave up his passion for horticulture, and he and Marjorie cultivated rich and fruitful vegetable gardens each year. They cooked fresh, home grown meals daily, and they canned what they could not consume for winter months. Dr. Degnan loved to travel, and he and Marjorie spent weeks each year across Europe and several Caribbean islands. Their eclectic, Old World taste was evident in the unique, cozy design of each of their homes.

Dr. Degnan was preceded in death by Marjorie, the love of life and his wife of 57 years.

He is survived by his eight children, Deena Lorraine, Shane Degnan, Tara Albertson, Colleen Perkins, Shannon Allen, Devin Degnan, Klancie Degnan, and Riley Degnan; his two sisters, Ann and Priscilla; his sons and daughters-in-law; his grandchildren and great grandchildren; and the thousands of children he helped bring into the world during his long career as an OB-GYN. Dr. Degnan will be greatly missed.

In lieu of a funeral, the family will be hosting a small, private gathering at a later date to celebrate the lives of both Robert and Marjorie.