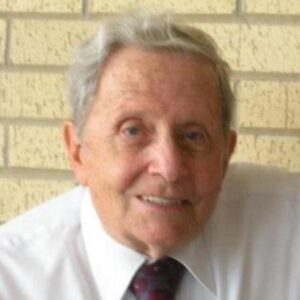 Our loving father, grandfather and friend, George Karl Lambert, passed away peacefully at home on Saturday, November 6, 2021, at the age of 94.  He was born August 9, 1927 in Murray, Utah at the Cottonwood Maternity Home to Edna May Donelson & George Hovey Lambert. He was the youngest of four boys; the oldest three being Hovey Aldous, Norval Hardy and Richard Donelson who all preceded him in death.

He graduated from East High School in 1945 where he was in an a capella choir and quartets. He joined the Navy in 1946 to serve in World War II. He went on a mission to Hawaii among the Japanese speaking people.
He graduated from the University of Utah 1953. He worked for the Highway Department, as Registrar at Utah State University and at ATK/Thiokol. He served as ward clerk, ward mission leader, high counselor, and a stake seventy.

We love him and he will be dearly missed. He lived a long life of serving God and others and looked forward to serving a mission with his father on the other side. He loved music and was excited to sing the Messiah with his mother and brothers again.