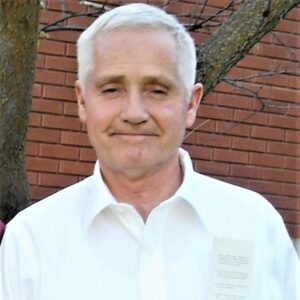 Randal Lee Starks was born November 11, 1950, to Agatha Rosalie and Roy Starks in Evansville, Indiana. His family moved frequently during his growing-up years; Indiana, South Dakota, California and Arizona. As a young adult, Randal was in a serious automobile accident that resulted in a traumatic brain injury with double vision for the rest of his life.

In 1978, Randal married Sandra McNew and they had a son, Seth Randall, who was killed in a car accident in 1999. Randal and Sandra divorced and Randal moved about 12 years ago from Illinois to Utah to be closer to family. In 2008, Randal married Kathryn Farr Eden, who passed away shortly after their marriage.

Randal was a member of the Church of Jesus Christ of Latter-day Saints and loved going to the Temple. Randal lived life on his own terms. He was always friendly to everyone. Randal would walk down the middle of the street and wave to everyone and remind them to “Do Your Best”.

Randal Lee Starks passed away peacefully in his sleep on November 17, 2021, in Roy, Utah.

There was a joyous reunion that day with his son, Seth Randall; his wife, Kathryn Farr Eden; his parents, Agatha Rosalie and Roy Starks; and his older brother, Terry Starks.

There will be no services held at this time.